The tourbillon is a complicated mechanism that's housed in the movement of luxury watch and clock movements. The complication allows for an unmatched level of accuracy, which often makes them too expensive to buy on their own. With this guide, we're going to help you find affordable options based on your budget with tips from our expert reviewers at Watch Shop

Due to its very high price, tourbillons are among the most revered mechanical watch complications ever made and have long been connected to the affluent. Even though their practical use is hotly debated, some of the rarest tourbillons are highly prized by collectors and connoisseurs throughout the globe because of their high worth.

A tourbillon has a high value because of its intricate mechanism, the effort, time, and attention to detail needed to build one properly, as well as the outstanding workmanship involved.

However, lately, inexpensive tourbillon watches have started to appear all over the globe owing to a number of Chinese producers, making the tourbillon accessible to the common person at rates so low that many people doubt they are genuine.

What are watches with tourbillons?

The tourbillon, which is a mechanical complication that Abraham-Louis Breguet created back in 1795, is where the escapement and balance wheel are both enclosed in a cage to counteract the forces of gravity, improving the accuracy of a mechanical watch. At least, that is the widely held belief. 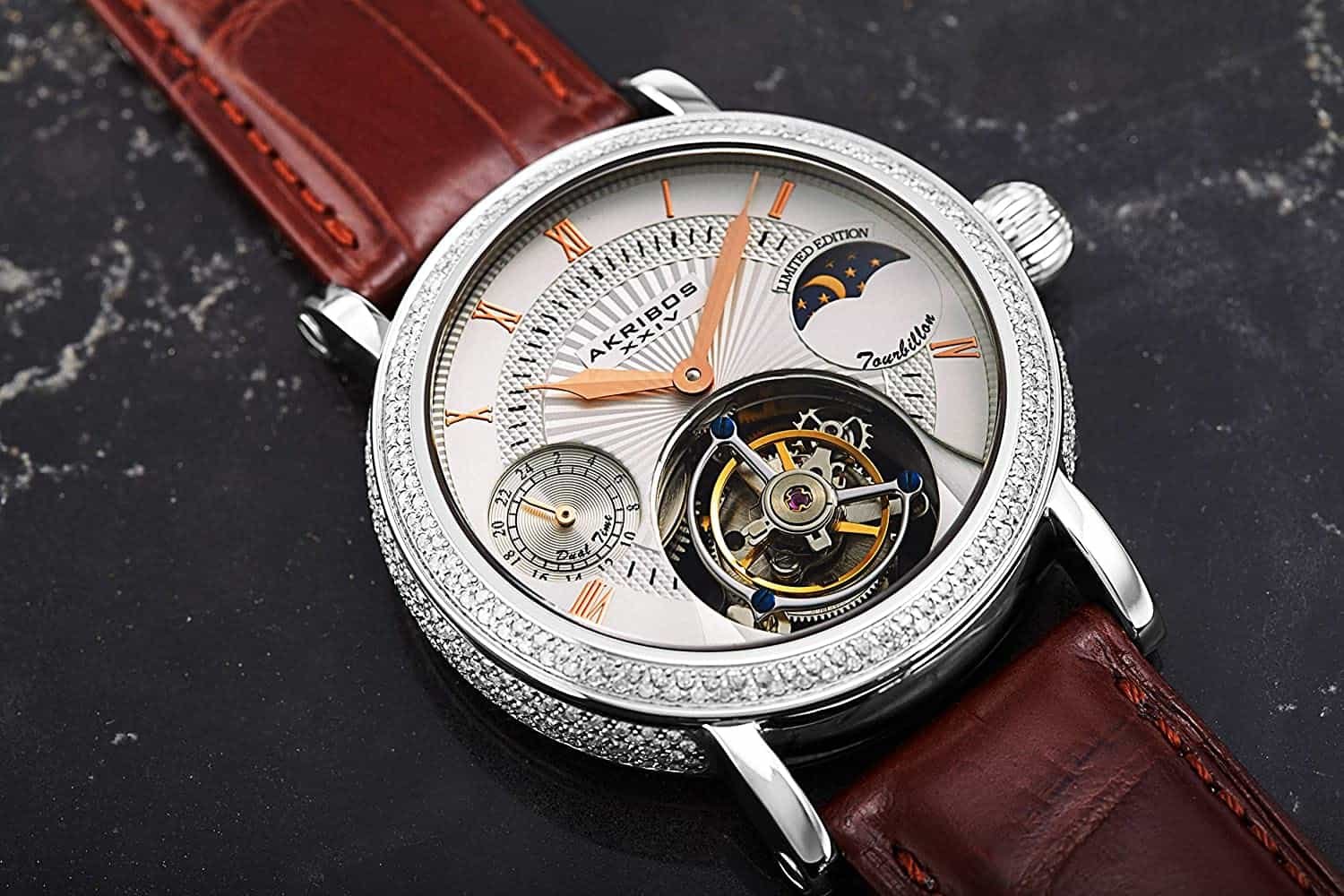 It is hotly contested whether the tourbillon really increases a watch's accuracy in a manner that makes it worthwhile to spend all that money. However, one thing is certain. Tourbillons are now used by the rich to demonstrate their social standing and as a form of workmanship.

Nevertheless, they are a lovely complexity to adore.

But now, Chinese watchmakers are starting to produce tourbillons at prices that are far lower than they have typically been for such a long period.

Why are watches with tourbillons so expensive?

There are questions in the watch industry about whether the exorbitant price of a tourbillon is justified despite the fact that everyone is aware of how expensive the process used by Swiss watch makers to create tourbillons is. 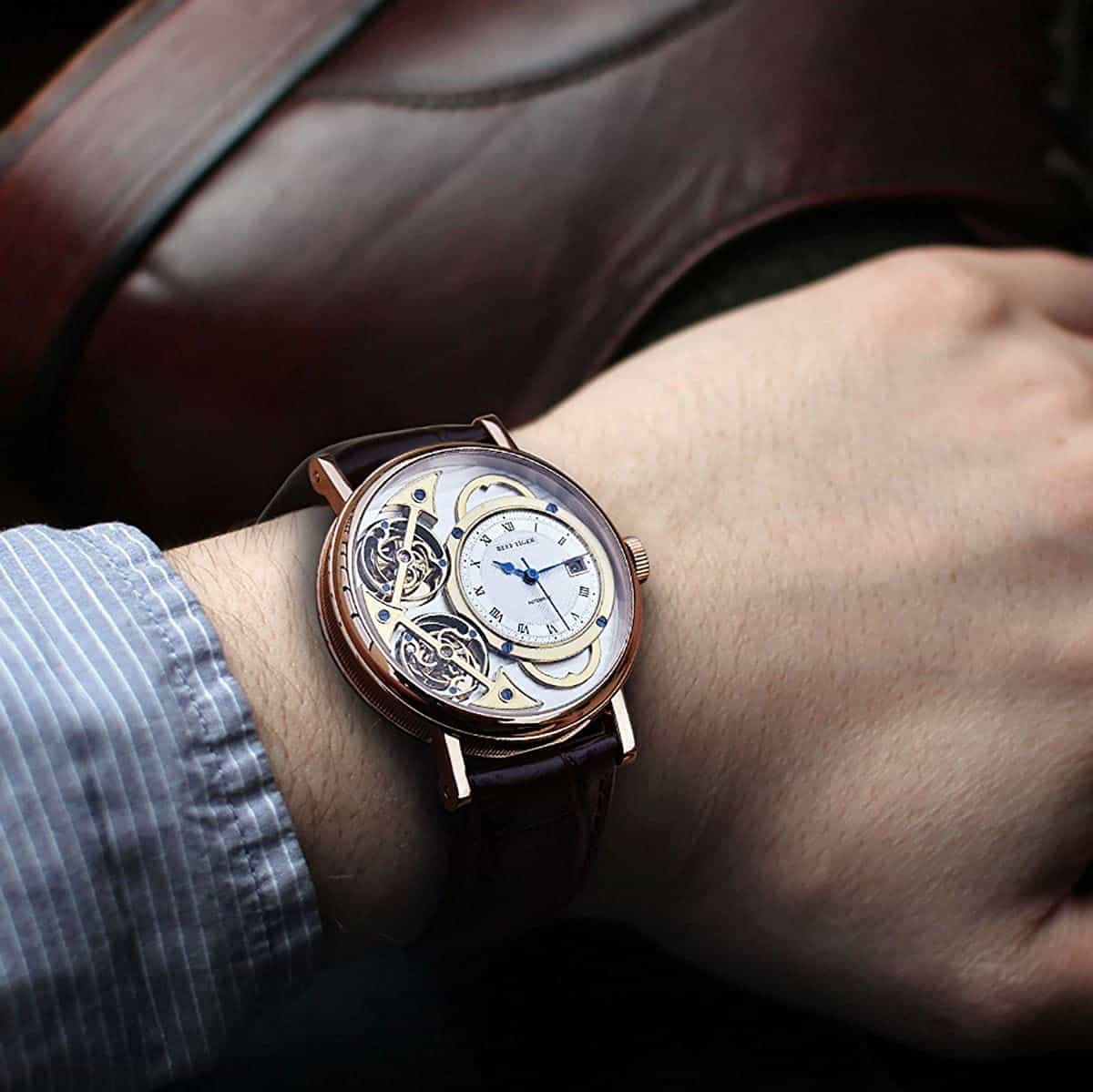 How, therefore, are tourbillon watches sold by Chinese manufacturers for as little as few hundred dollars?

This query can have the following resolutions:

First off, Chinese labor costs are very low when compared to those in Switzerland or the rest of the globe. Only the time required to create a tourbillon turns out to be very expensive.

Additionally, Swiss watchmakers utilize expensive materials like titanium or platinum, which drives up the price even further. Chinese, however, employ materials that are quite inexpensive. 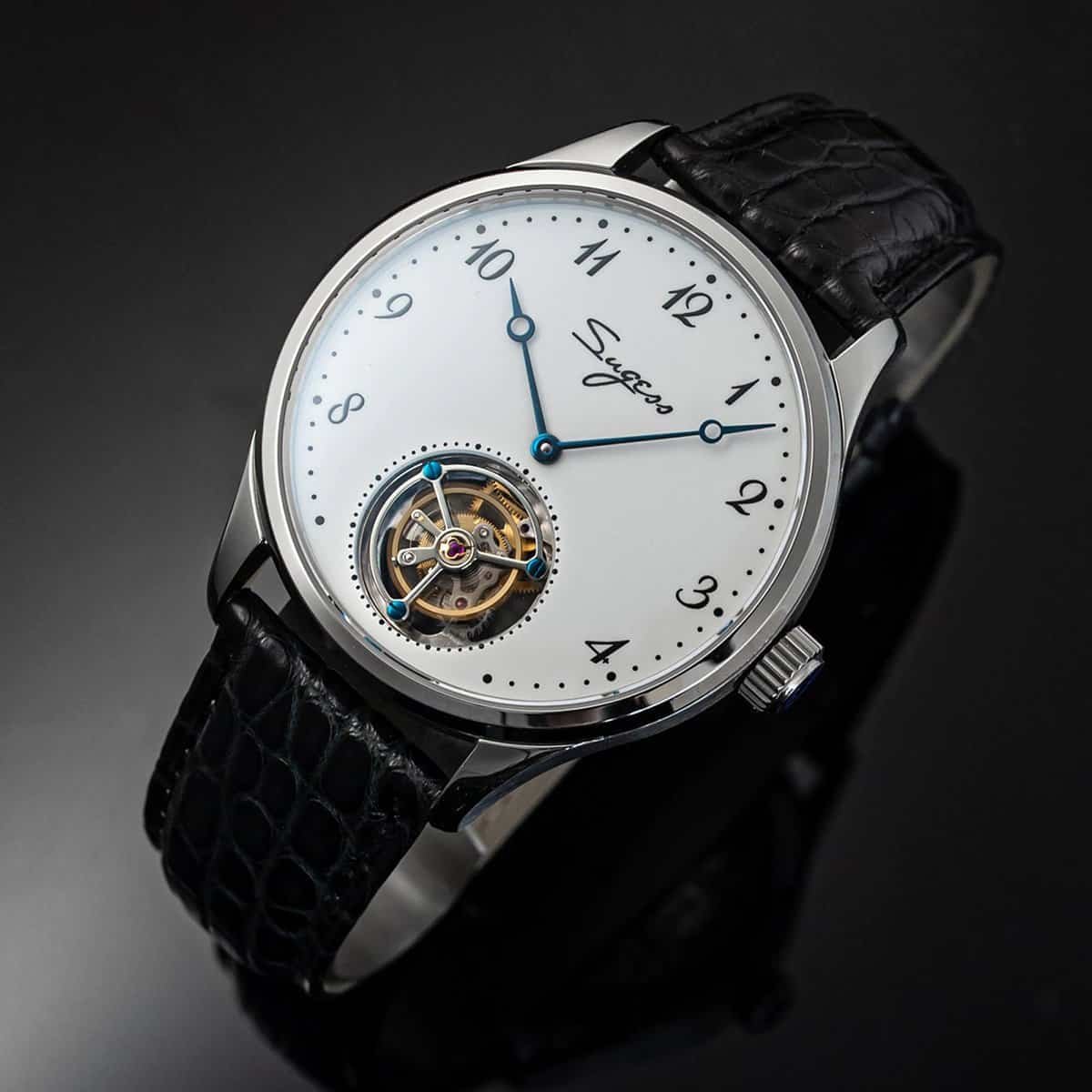 Additionally, the Chinese economy's capacity for mass manufacturing allows it to further cut the cost of a number of components, including several components of the tourbillon complication.

The secrecy surrounding the true expenses of producing a Swiss tourbillon is another issue, and many people question whether this isn't simply an excuse to raise the price since the affluent and powerful are the ones who value exclusivity, luxury, and branding above all else.

On the other hand, it is unrealistic to expect a Chinese-made tourbillon to meet the same level of excellence as a Swiss one any time soon.

So let's take a deeper look at some of the most cost-effective tourbillons available today:

Stuhrling, a company that was established in 2002, has entered the market with high-end watches that are reasonably priced. Since its debut, their tourbillon line has received favorable reviews. The Stuhrling Original Viceroy Tourbillon, which is a part of that line, demonstrates that you don't need a huge budget to buy a great tourbillon watch. 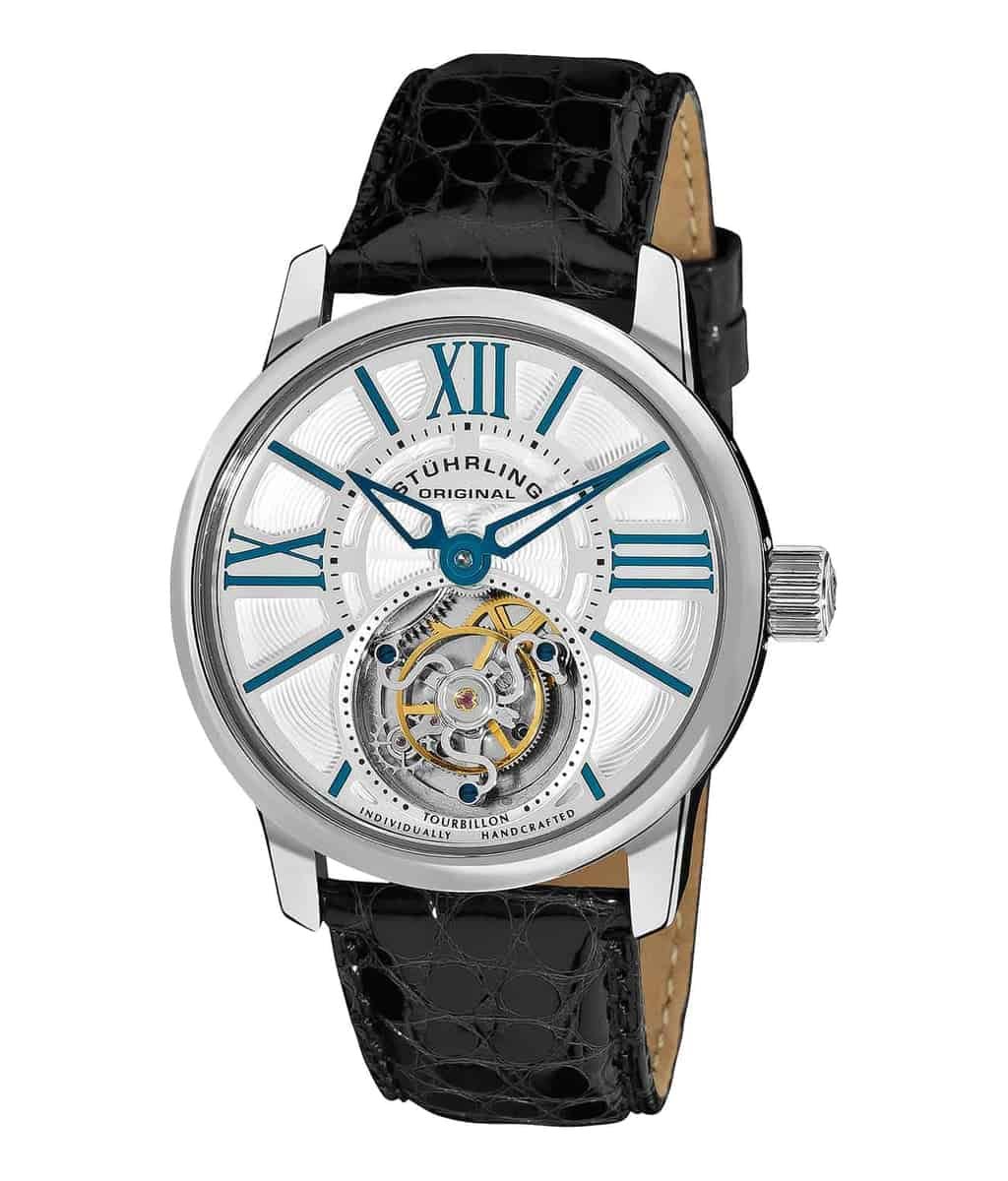 A 42mm stainless steel case with a beautiful polished bezel and a 40-hour power reserve hand-wound mechanical movement power this watch. Although it looks decent enough, the crocodile leather strap it is coupled with feels a little bit cheap.

The tourbillon is visible on the dial at 6 o'clock and blends very well with the Roman numerals and skeleton hands hidden under the sapphire crystal glass. The watch is readable, understated, and attractive, although it lacks luminescent hands and hour markings and a date function. 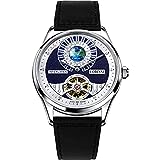 The Lobinni Automatic Skeleton is quite affordable yet nonetheless highly attractive. It has a sapphire crystal glass covering an automated movement encased in a stainless steel casing with a 50m water resistant certification. The watch comes with a real leather strap or a stainless steel band. 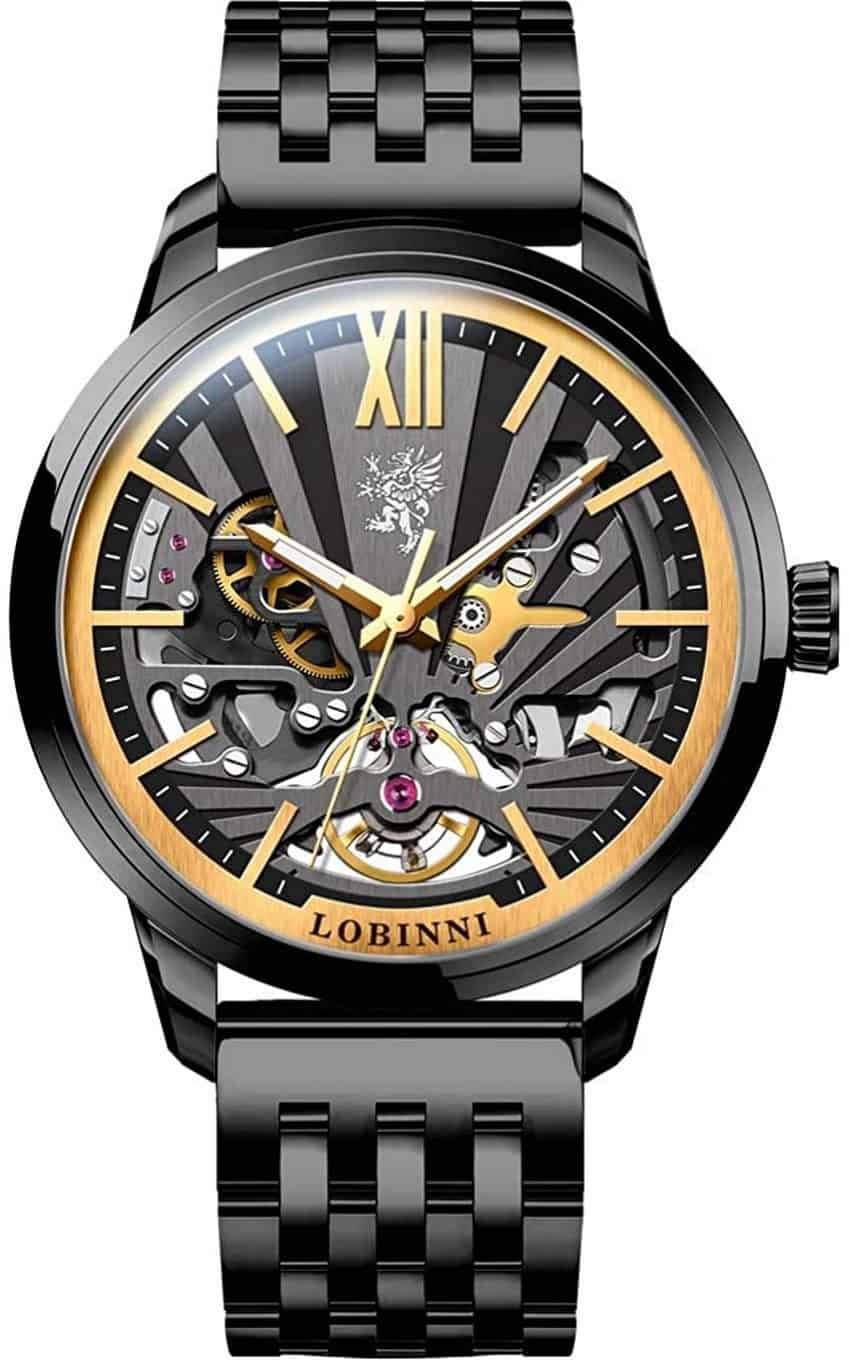 Despite the watch's crowded dial and macho design, it manages to look OK. A steel gray tint with sporadic bursts of gold tones from the gears under the dial allows you to glimpse little portions of the mechanism that runs the watch. 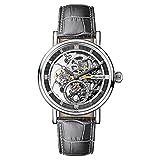 When thinking of tourbillons, or even timepieces in general, whether they are quartz, self-winding, or manually wound, Ingersoll is not a brand that immediately comes to mind. 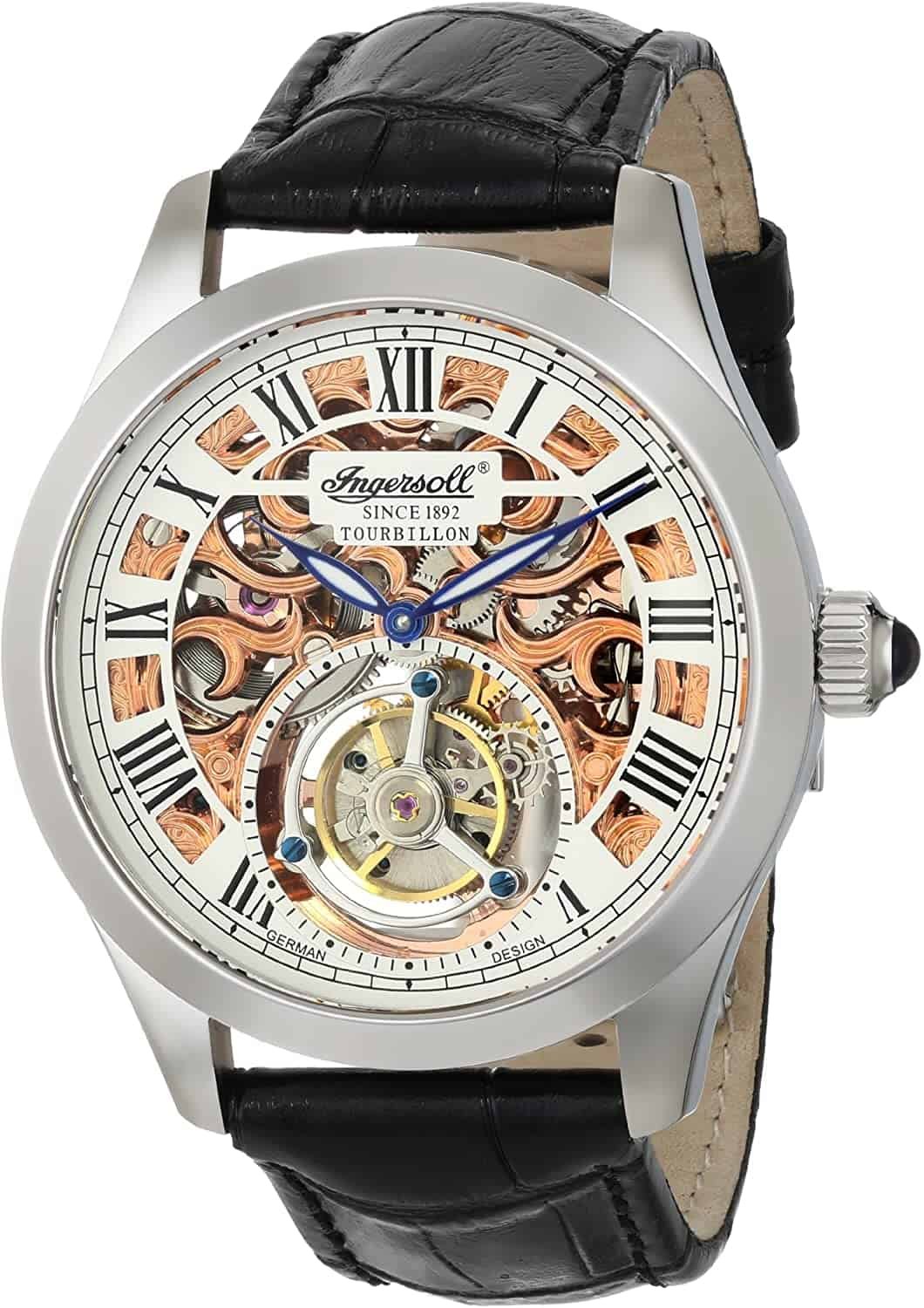 However, it so happens that Ingersoll is one of those brands that began as an American business and relocated to the far east to reduce their manufacturing costs.

Their Golden Spike Tourbillon, which costs little under $1,500, is one stylish alternative for a tourbillon. The watch has a tourbillon at the bottom and a black and white face with rose gold-tone skeletonized bridges. 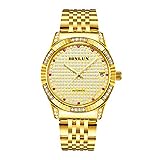 The Binlun 18k Tourbillon is one of the better inexpensive selections, although the style is a touch over the top. Beyond the crowded look, there is a skeleton window that provides a peek of the tourbillon movement within the 39mm stainless steel case that has been 18k gold plated. 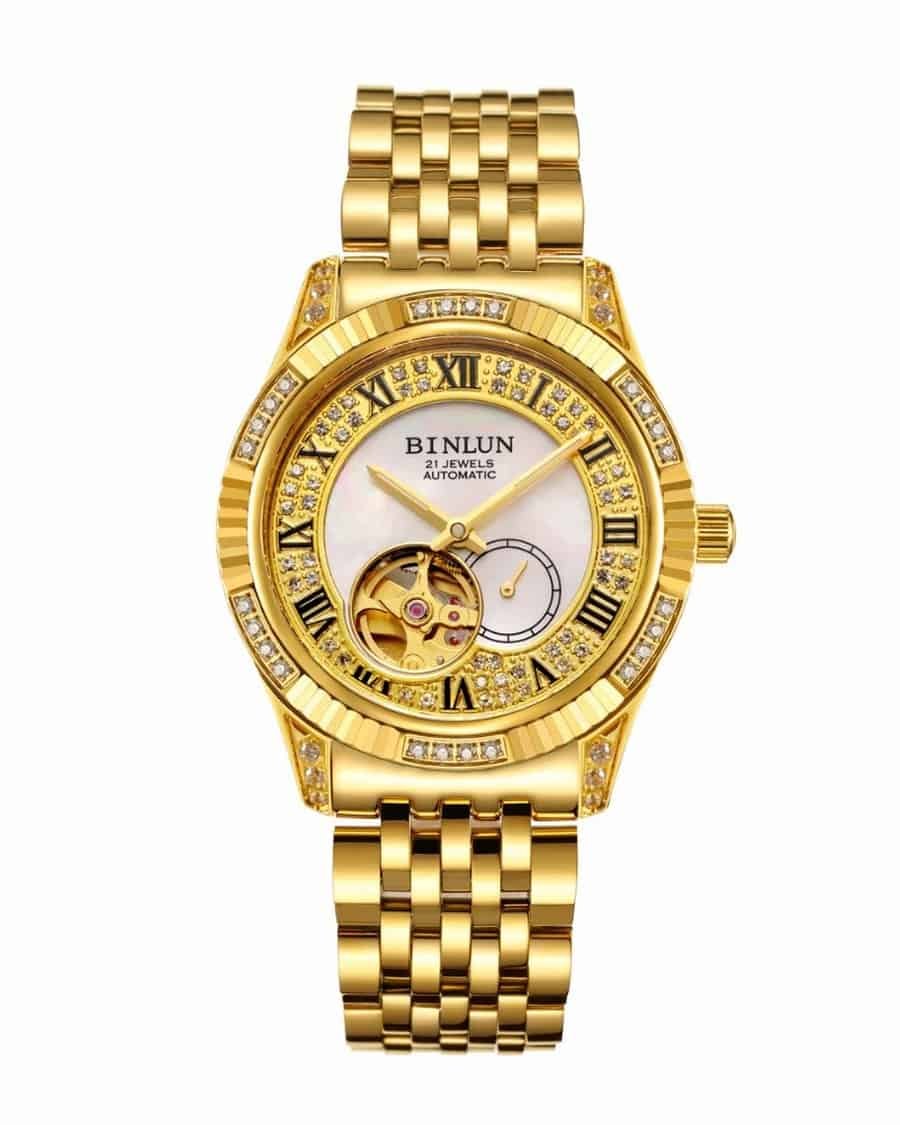 The watch has a white dial with black Roman numeral hour and minute hands that contrast with the remainder of the watch's gold tone, rhinestone-encrusted bezel. 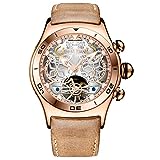 One of the top Chinese watch companies is Reef Tiger, although it has a dubious past. Despite this, they are nevertheless able to produce some better quality, more sophisticated watches than their competitors. 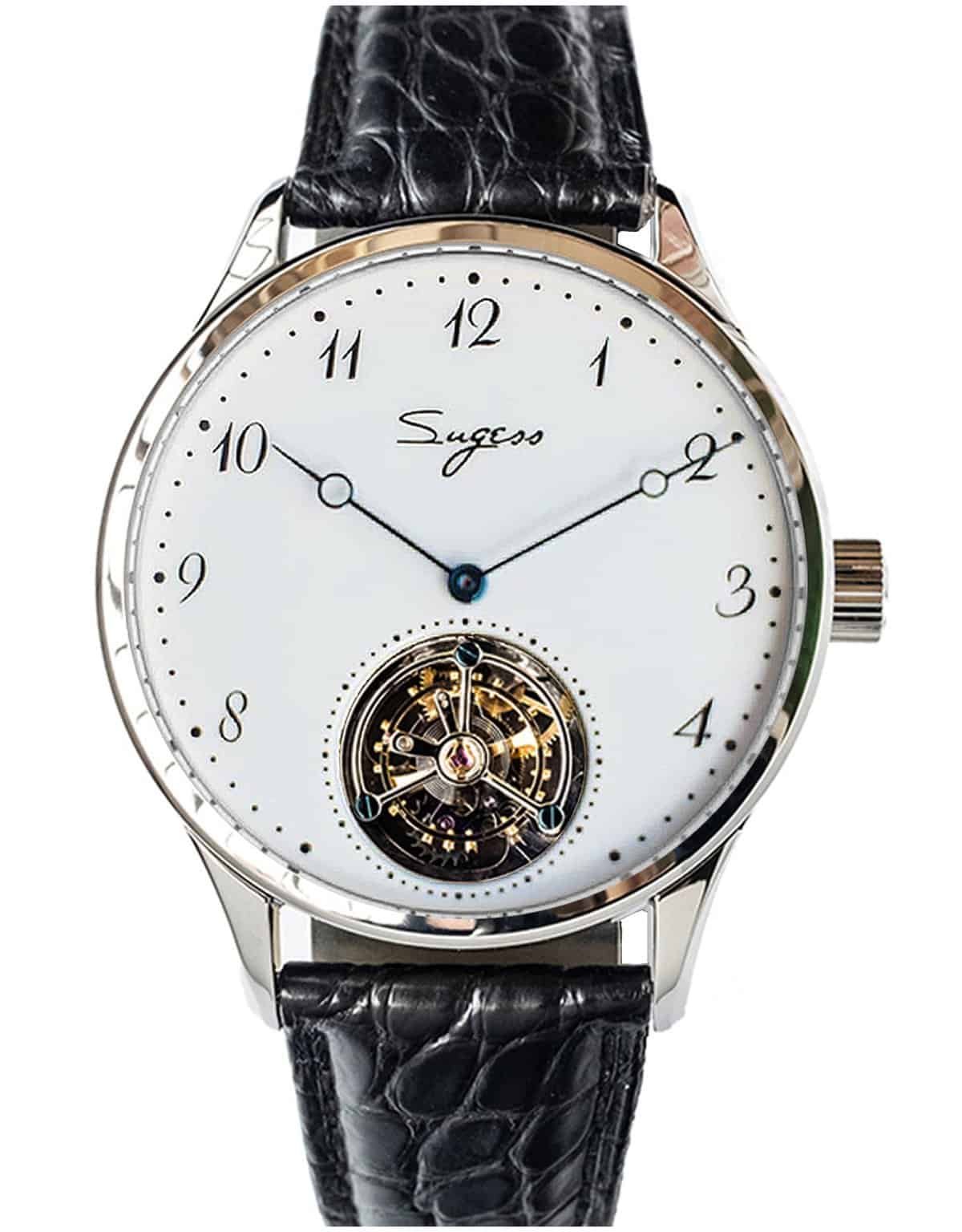 Particularly when you consider how inexpensive it is at around $300, the Reef Tiger Multifunctional Tourbillon, RGA703 just looks wonderful.

The 44mm stainless steel case with rose gold tone protects the automatic movement, which is visible via the analog skeleton dial behind the domed sapphire crystal glass. The day and date sub-dials are located at 3 and 9 o'clock on this Tiger Reef model, while the month and year are shown at 12 o'clock.

The Master Sugess Tourbillon brings a fresh look and a minimalistic design on the affordable tourbillon market. 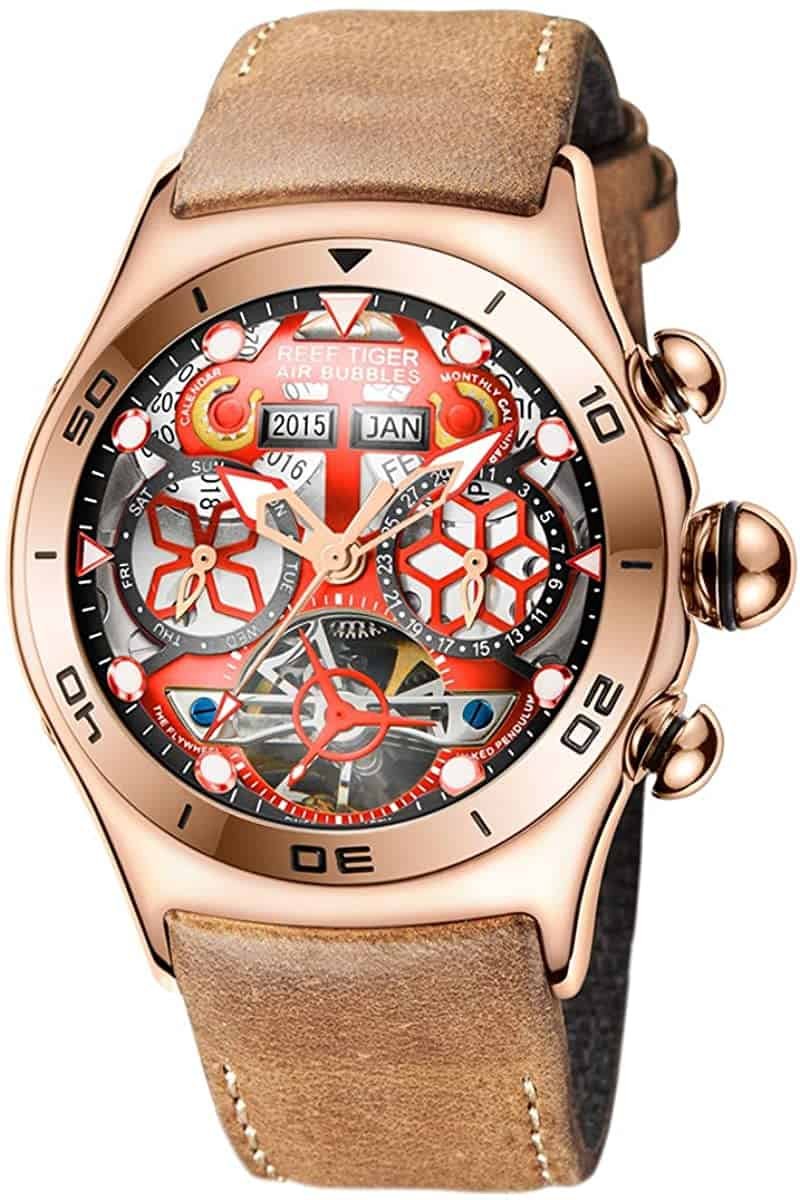 The watch features a straightforward but really gorgeous 12-hour main enamel face with lovely Arabic numerals that are painted in high-temperature black. The hour and minute hands and screws made of blue steel provide the dial a good contrast.

The eye-catching tourbillon glass is located at the 6 o'clock position. One of the best inexpensive tourbillon watches available is definitely this one. The tourbillon, which costs roughly $600, claims to be the genuine deal. 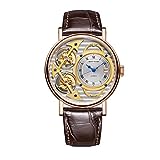 The Men's Double Tourbillon RGA1995 from Reef Tiger has a brilliant blue hour, minute, and seconds hand with an analog silver sub-dial display with Roman numerals. The date window is located at the 3 o'clock position on the subdial display. 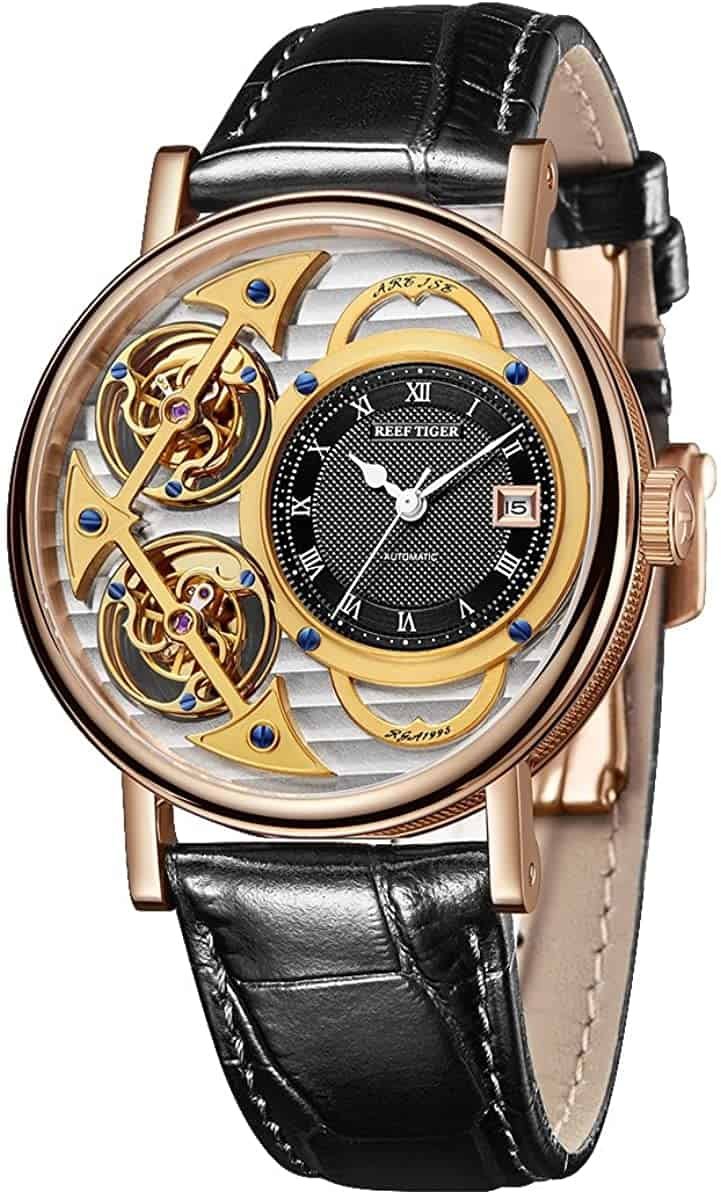 The watch's Miyota 6T15 automatic movement is housed within the 44mm casing. The item seems more costly than it really is because to the two tourbillons on the left side that have golden accents.

The Stuhrling Devilray Tourbillon is a striking piece of jewelry with a 44 mm all-black case and a striking sharkskin strap. It doesn't look or feel cheap at all. 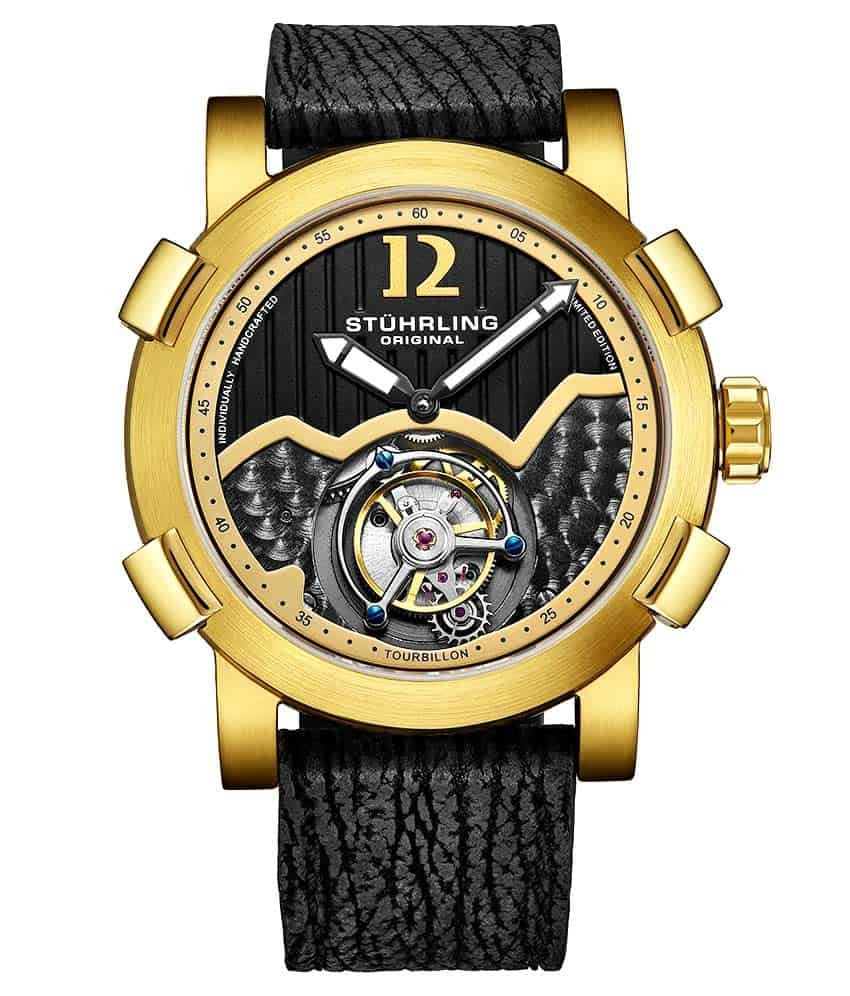 It is driven by a mechanical Chinese Seagull movement with a 40-hour power reserve and a 4Hz frequency. The display case rear allows you a clear view of the movement.

The dial is split into two halves, with the top half housing the solitary hour indication, a huge number 12, and the enormous, white, luminous hour and minute hands. A tourbillon is located below the dial's center and is encircled by a dial design that resembles carbon fiber. Since the glass is sapphire crystal, you may anticipate excellent scratch resistance.

The Loreo Multifunction Tourbillon has a black analog dial with two sub-dials for the month and day at 3 and 9 o'clock in addition to a magnificent tourbillon at 6 o'clock. 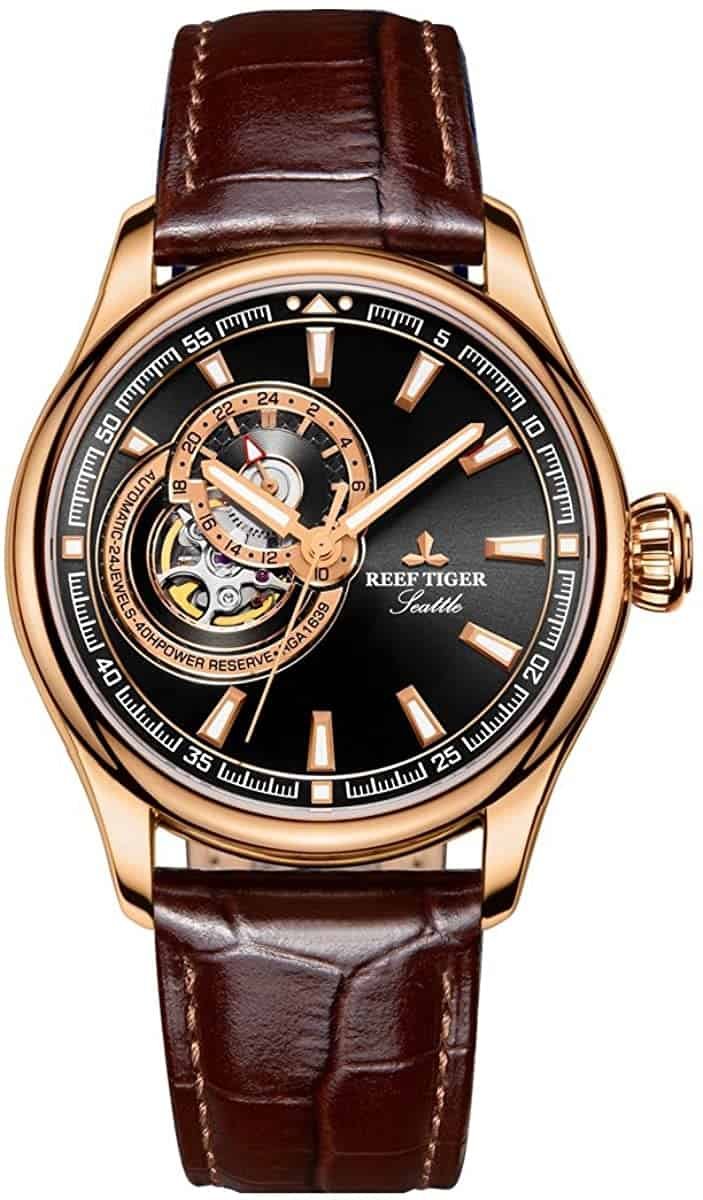 Roman numeral hour markers, hour and minute hands, and the 40mm stainless steel case and bracelet are all gold in hue to complement the tarnished gold of the case.

The watch has an automatic mechanism and a 30m water resistance certification, which shields it from splashes and rain. 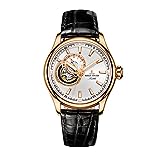 The Reef Tiger Tourbillon RGA1639 Luxury has a more upscale appearance than the watches from the same company we've previously shown you. 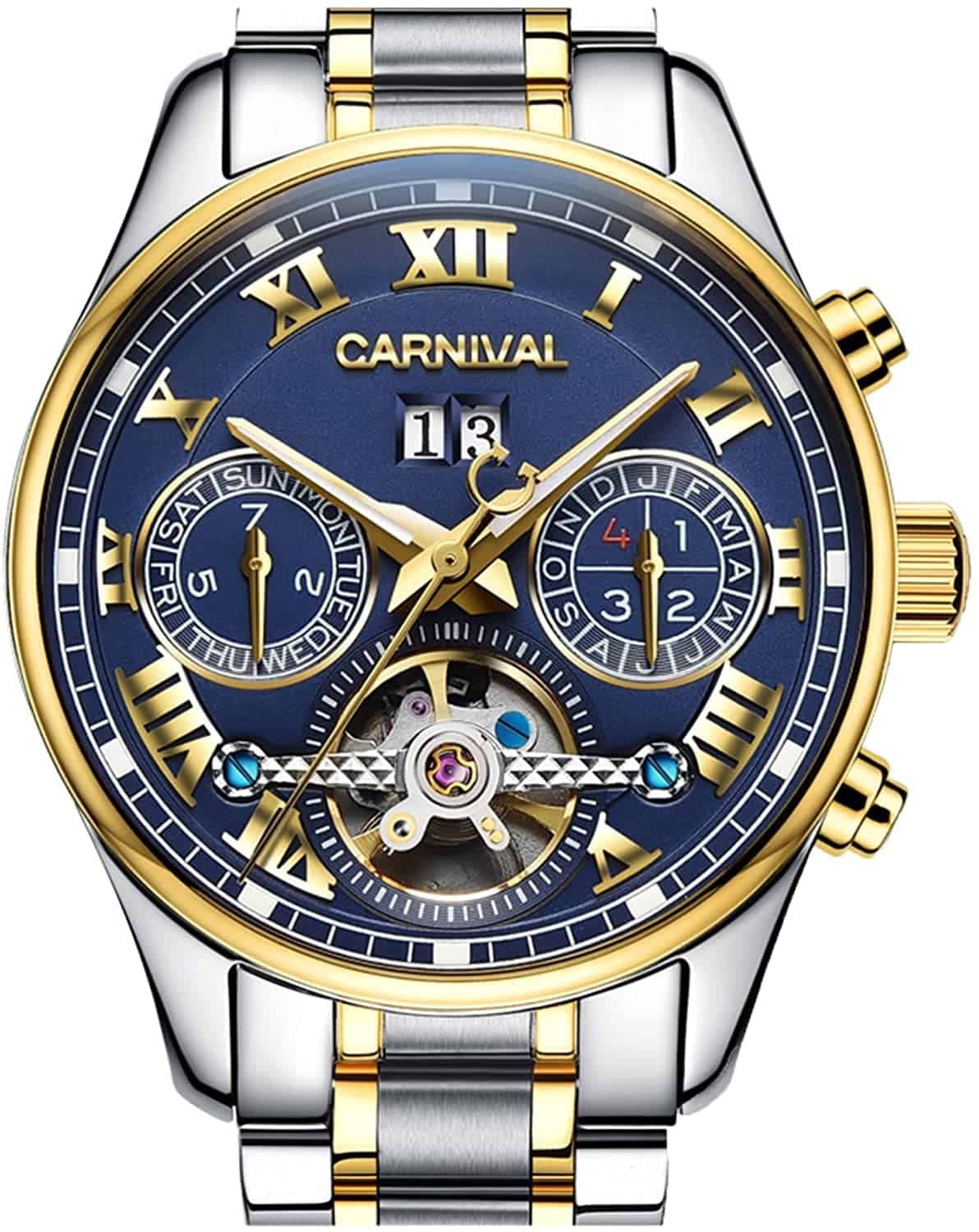 It has a more tasteful deep blue dial with rose gold-toned luminescent hands and indexes. At 9 o'clock is a nice-looking tourbillon, and at 11 o'clock is a dual time sub-dial.

The Nesun N900 is an automatic watch that costs roughly $500 and has a stylish replicated tri-axis tourbillon, sapphire crystal glass, a 50-hour power reserve, and a 50-meter water resistant certification. 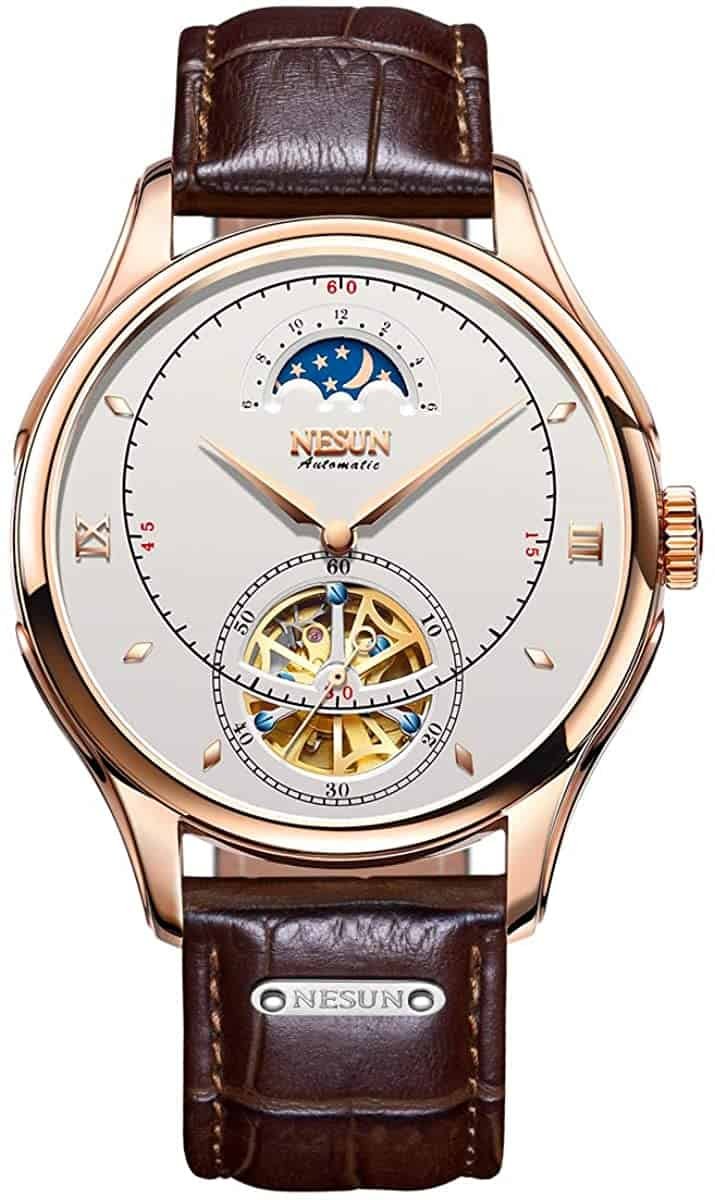 Even though it has a straightforward design, it appeals to enough people, particularly those who want high-class aesthetics without having to spend a lot of money. 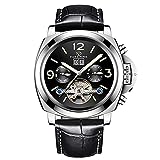 The ERA Prometheus Tourbillon comes with a price tag that hovers around $1,500 for its base model. The finest feature of it is that you may customize it to your tastes by choosing between a platinum-plated or stainless steel casing, a manual or self-winding movement, etc. 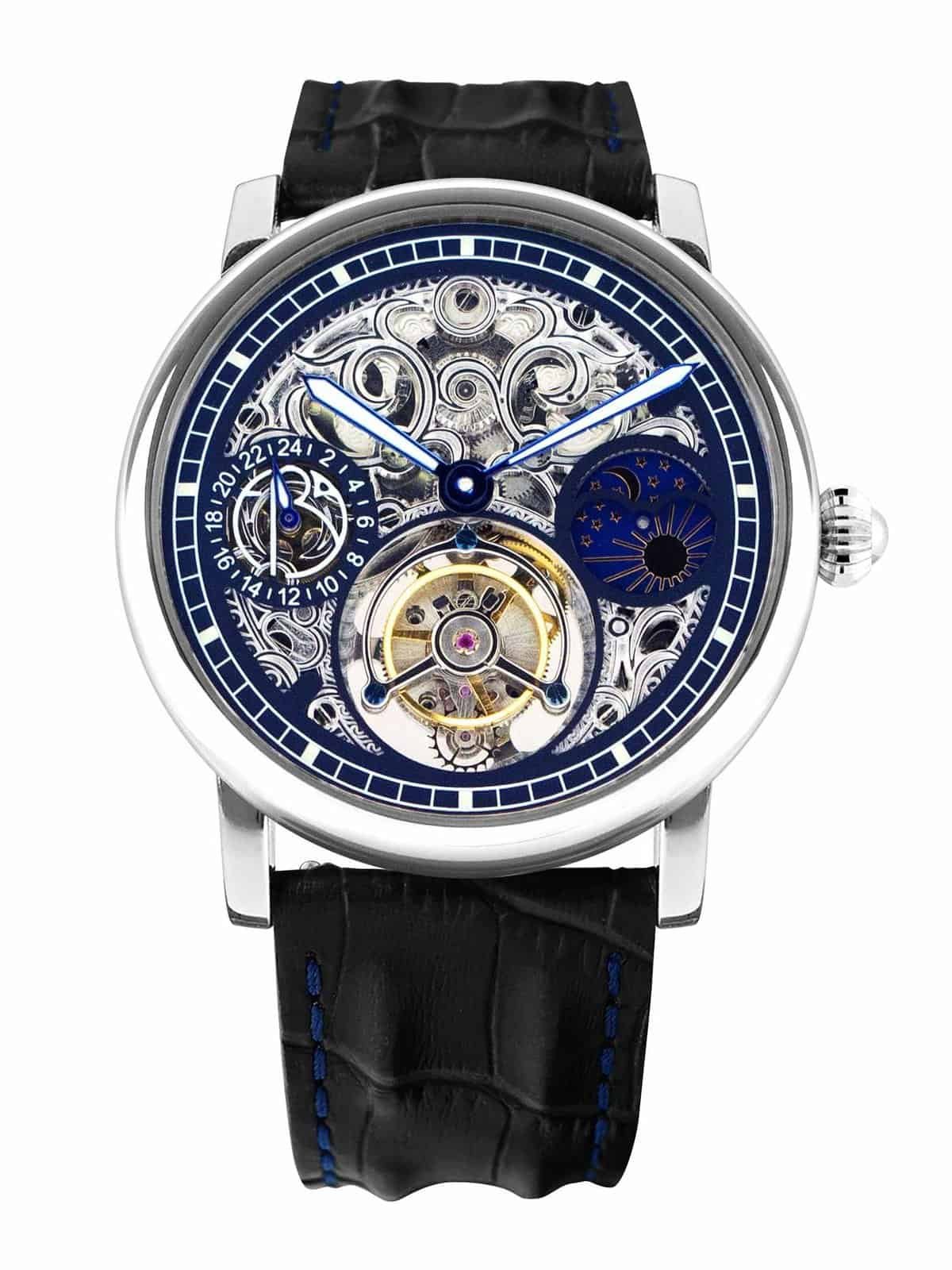 The dial contains a moon phase indication at 3 o'clock and a dual time sub-dial at 9 o'clock. A magnificent single-axis tourbillon is located at the 6 o'clock position. 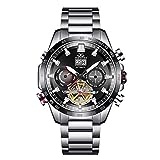 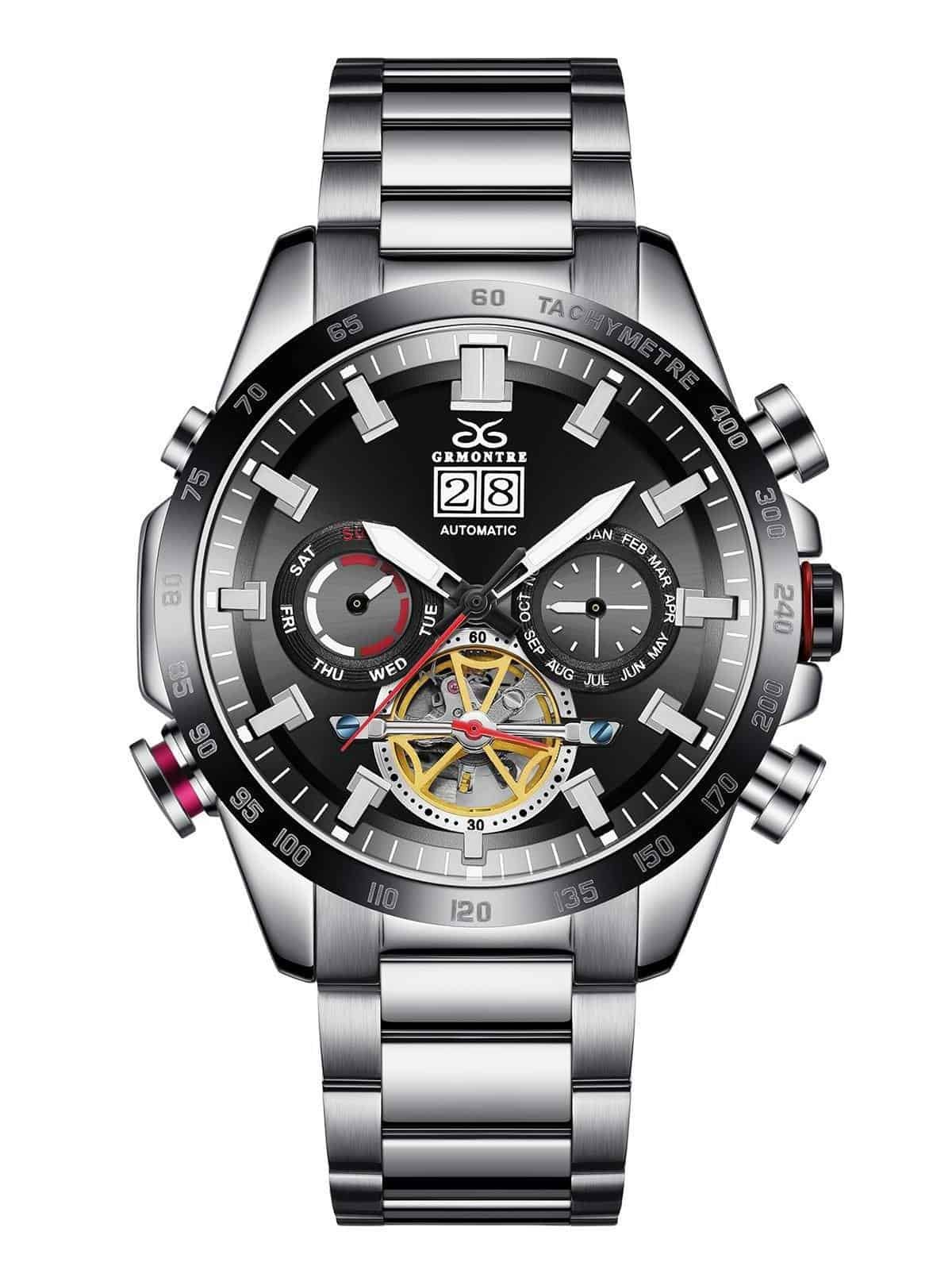 The design is excellent and conceals its lack of quality. With a simulated triple-axis tourbillon and a date, month, and day dial, it has a highly appealing design.

The watch has a stainless steel casing that is 30m water resistant, a 35-hour power reserve automatic movement. 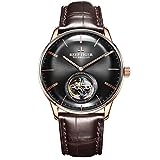 The Reef Tiger Tourbillon RGA1930 is a model that is much more magnificent than the other Reef Tiger pieces mentioned above, as seen by its price of around $1,100. 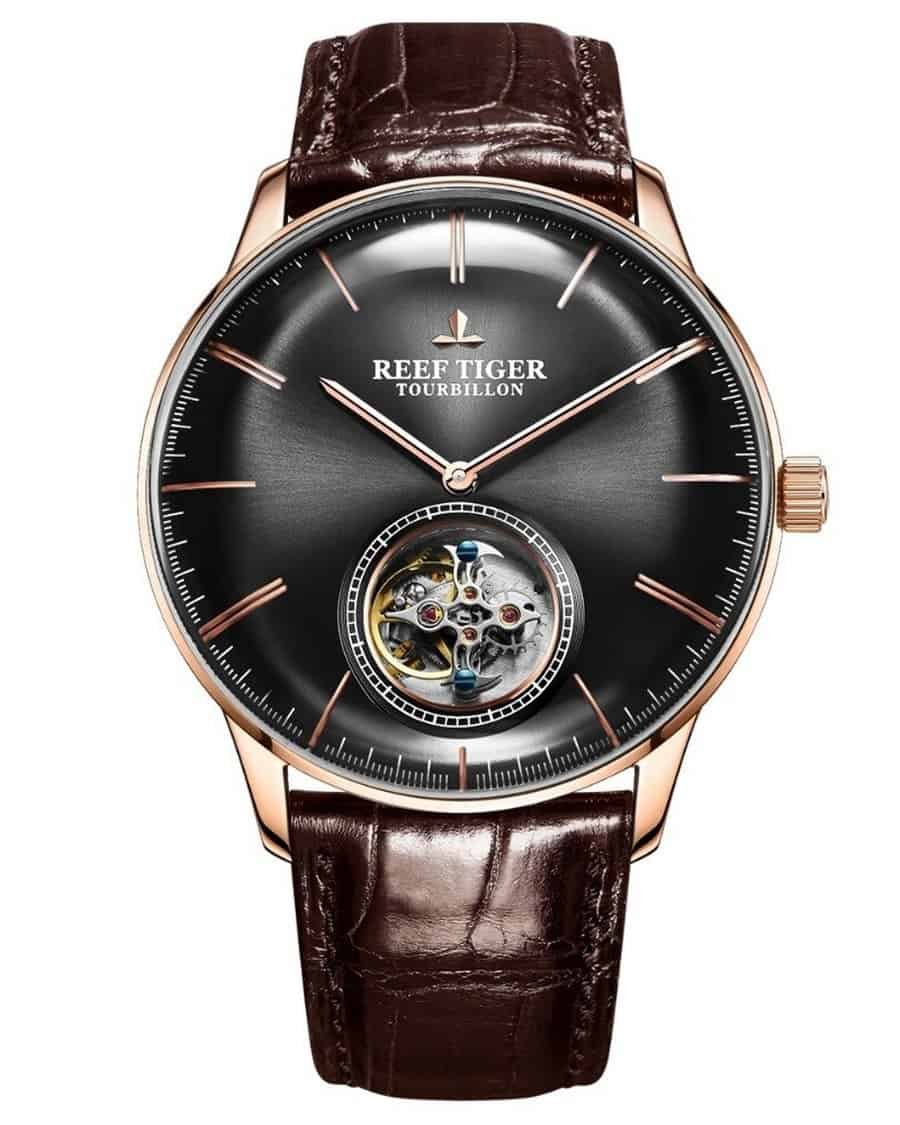 With a sleek and understated deep blue dial and a tourbillon movement visible at the 6 o'clock position, the RGA1930 has a captivating and attractive appearance.

Even if the price is more than the other models on our list, this may indicate a better level of quality and assurance that the object is a true tourbillon.

One of the greatest alternatives available currently on the market for budget tourbillons is the Akribos XXIV, which has a unique moon phase display, dual time, and a skeletonized lower half of the dial. 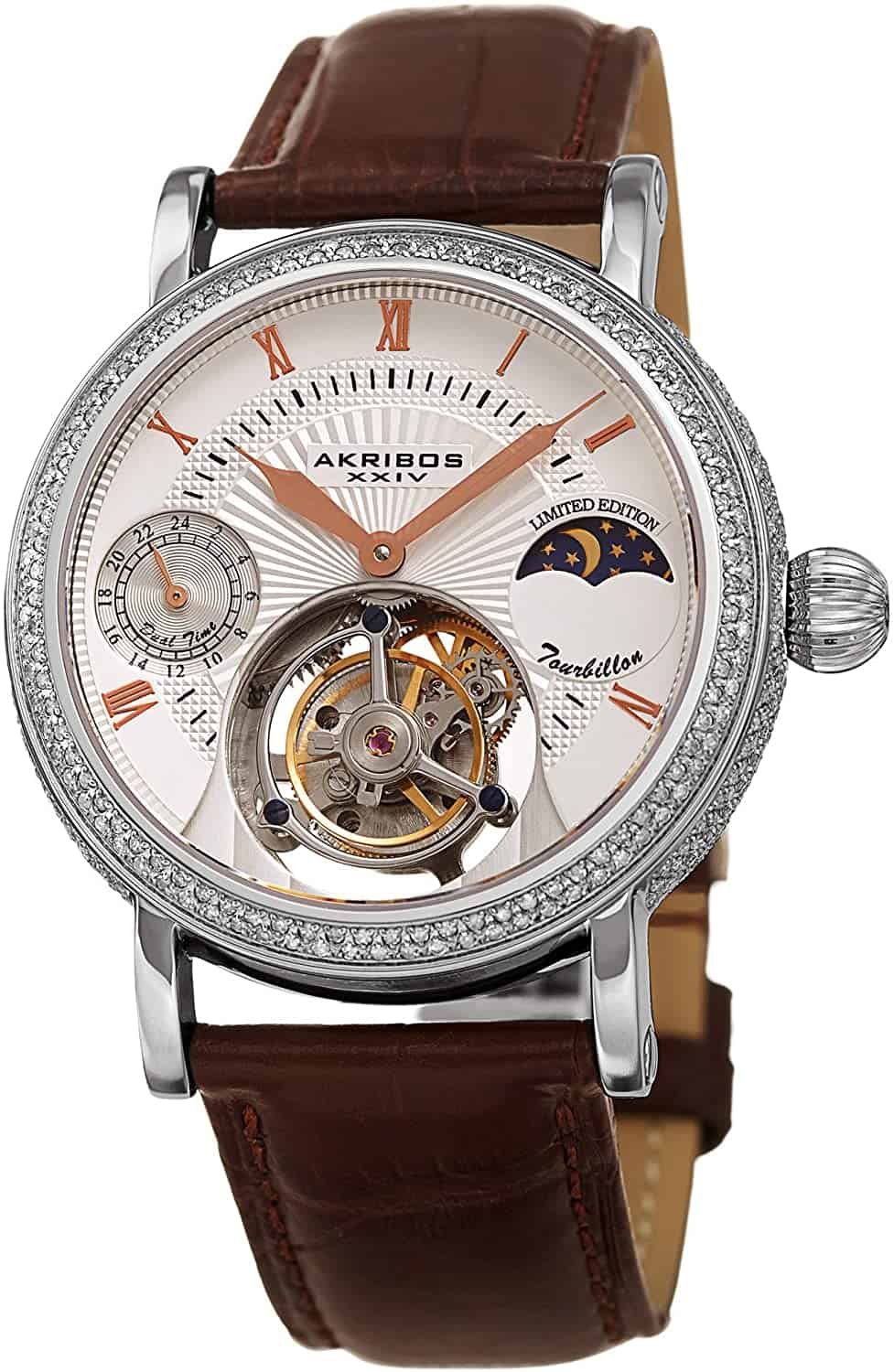 The watch has a primary sub-dial at 9 o'clock for a second time zone, along with gold tone Roman numerals and hands on the main display. The moon phase indicator is located at 3 o'clock, and the skeletonized view of the self-winding mechanical movement is stunning at 6 o'clock.

The 44mm stainless steel Akribos XXIV looks upscale overall yet only costs around $550.

With the stunning and affordable alternatives on this list, the era of the tourbillon as a pricey luxury item only for the wealthy is ended.

The "tourbillon watch most expensive" is a type of watch that has a rotating carriage. These watches are often more complex and expensive than other types of watches.