This is a review of the Bulova Precisionist watch. This brand makes some really high-end timepieces, with Swiss movements and usually very subtle designs. They are known for their quality, but also for being quite expensive – so this one falls in to that category as well!

The "bulova precisionist movement" is a new watch that has been released by Bulova. The watch features a quartz movement and is water resistant up to 100 meters.

Beautiful vintage and contemporary fusion with a tribute to the illustrious Glycine Watch creator.

At least in the United States, Bulova has a long history in the watch industry. The company's history begins in 1875, when Joseph Bulova began offering timepieces for sale in New York City.

According to the firm, manufacturing started in 1911, and when the first radio watch advertisements were aired in 1926, Bulova rose to the top of the watch industry in terms of marketing.

In the 1950s and 1960s, Bulova wristwatches were particularly well-liked, and the business is still well-known for the renowned Accutron timepieces with its "tuning fork" design. In very small numbers, they are still produced today.

The Bulova watch line is a significant component of the company's strategic strategy, and Bulova was sold to Citizen in 2008.

A brand-new range of wristwatches called the Precisionist line is sold under the Bulova name. Many wristwatch enthusiasts and collectors worldwide were taken by surprise when these timepieces were introduced very abruptly.

The Precisionist wristwatches' technology plays a role in the surprise. It would be sufficient to say that The Precisionist has a novel form of thermo- or temperature-compensated quartz movement. But another feature of the Precisionist watches is a seconds hand that sweeps "continuously," which is quite uncommon in and of itself. One of the key selling aspects of Seiko Spring Drive watches that cost several thousand dollars is the seconds hand's smooth movement. Here, the same kind of motion can be found in a watch that costs only $250.00.

This is not to argue that a Bulova Precisionist is on par with a Grand Seiko, but it is intriguing to see the continuous sweep seconds hand, which is often seen on extremely expensive watches, on a timepiece that is really intended for the general market. 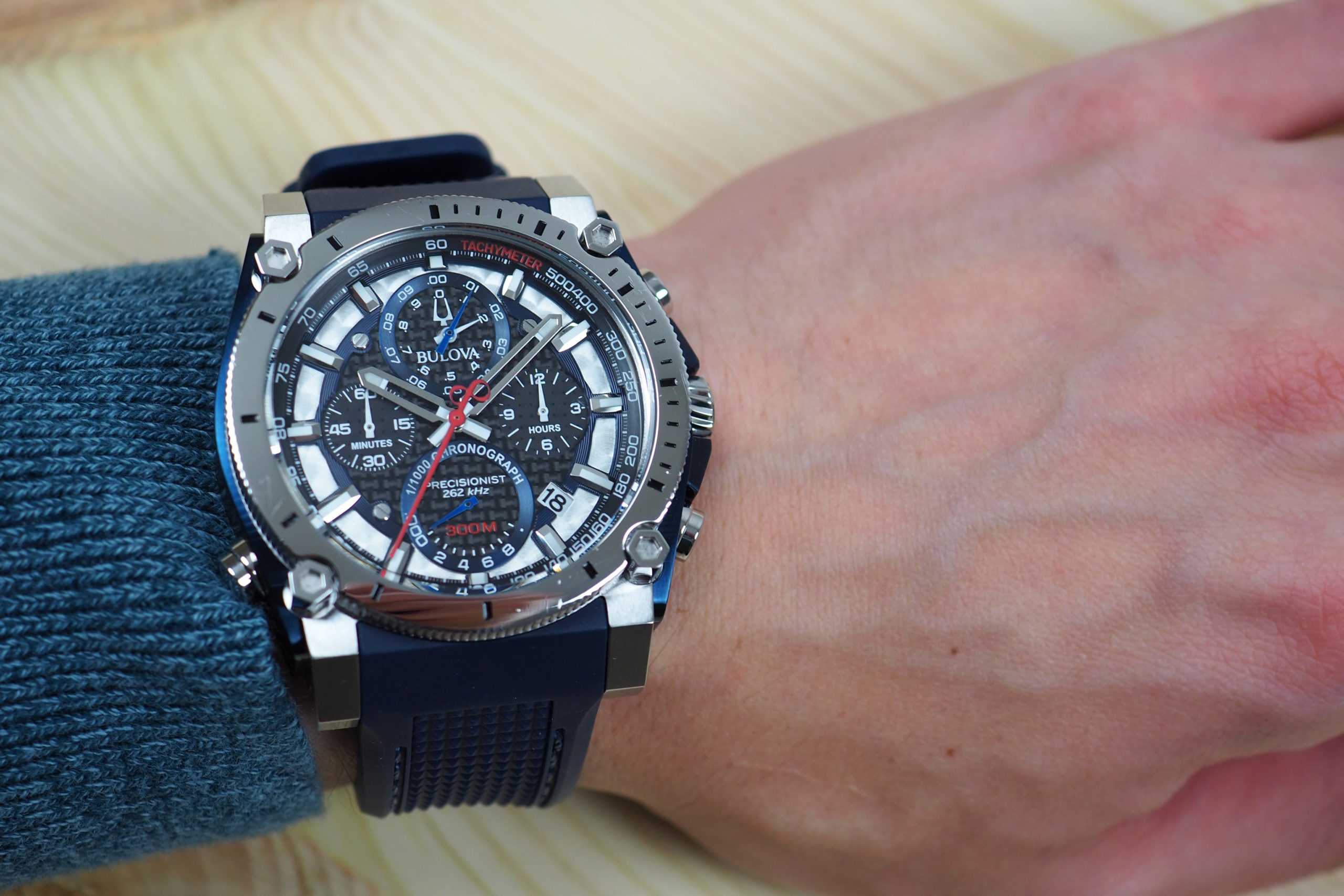 Depending on how you define "HEQ" or High-End Quartz watches, the Precisionist watches aren't quite HEQ. However, Bulova describes the watch as "the world's most accurate timepiece with a constantly sweeping second hand" and makes some pretty intriguing promises for it. What a bold assertion!

The paradox of watch collecting is that even the most costly high-end mechanical watches may be significantly more accurate than some of the least expensive quartz watches. The radio-controlled "atomic" quartz watches, as those in the Casio Waveceptor range, are the most precise timepieces.

For instance, my $30 Casio Waveceptor watch synchronizes with the NIST "atomic" clock in the United States every night, making it the most precise watch available. It is placed next to mechanical watches that cost ten times as much and that, in addition to losing a few seconds per day (the maximum possible loss), also entirely cease after around 36 hours if they are not wound.

Precisionist Bulova is not a radio controlled watch, and some collectors put the radio controlled versions in a different category. HEQ watches can refer to “tweaked” quartz movements that are temperature compensated or have other features making them more accurate than basic quartz watches.

According to Bulova, the precision of quartz is influenced by temperature variations and vibration frequency. They have raised the vibrations of the Precisionist movement to what they claim is 8 times the frequency of a typical quartz watch and added a third "prong" to the quartz crystal.

My Seiko 8F56-based perpetual calendar, which has a frequency of 196 608 Hz, is another example.

The frequency of the common ETA 2824 movement, which beats at 28,800 beats per hour (4 kHz), is almost twice as fast as 16 beats per second, or 960 beats per minute and 57,600 beats per hour. The Precisionist movement's seconds hand gives the impression of moving smoothly across the dial, much like an electronic wall clock. The human eye may, on rare occasions and only under certain lighting circumstances, detect extremely small beating or stuttering motions in the Precisionist seconds hand. For instance, when the watch is lit in strong sunshine, the faint ticking action may be heard.

Additionally, Bulova asserts that the Precisionist movement operates at a frequency of 262.144 kHz, however I'm not sure precisely how they arrived at that figure. According to the manufacturer, the Precisionist has the highest vibrational frequency of any watch on the market right now, and that frequency "minimizes the influence of temperature variations and achieves remarkable accuracy."

Bulova says that most quartz watches will run within 15 seconds per month, but they claim that Precisionist Bulova is accurate to 10 seconds per year, an impressive feat. And even more impressive considering the price of these watches.

The Champlain, Claremont, Longwood, and Tanglewood are the four forgettable collections that make up the Precisionist line. With what I believe to be four terrible Allen screws in each corner of the watch, the Champlain series has a sort of dive watch appearance. The timepieces feature cluttered faces and bland, mass-market style that screams "been there, done that."

The brown Claremont variant shown in my images and video belongs to the Claremont collection, which is, in my opinion, more fashioned than the others. Any watch collector worth their salt wouldn't give the other two series a second glance since they are blingy, faux-diamond studded concoctions. 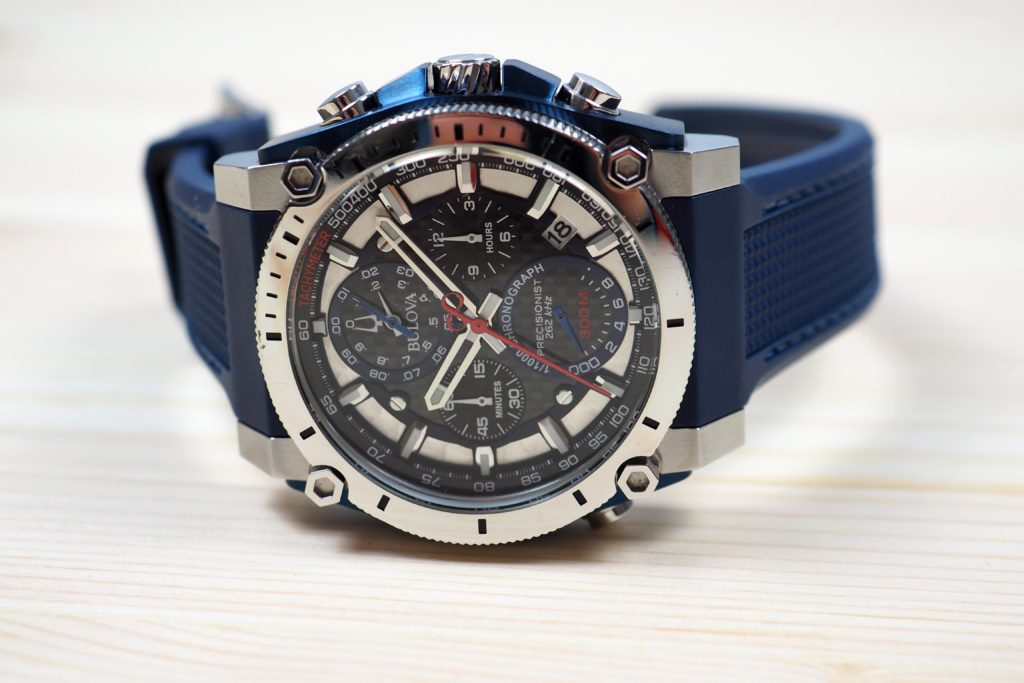 It's unfortunate that Bulova (Citizen) didn't seek any inspiration from their past (although my feeling is that Citizen watches are generally in need of a styling theme and strategy also).

The Claremont seen here, though, has considerable appeal because to its "3D" face and what seem to be machined numerals. The casing is softly contoured to suit the wrist comfortably. Without the crown, it is 44 mm broad and 51 mm from lug tip to lug tip.

The brown version of the watch pictured here arrived with a quite good fake alligator brown strap that felt a little stiff. The watch requires a 22 mm strap (18 mm at the clasp). I changed it out for the stunning waterproof leather Di-Modell "Imperator" strap shown in the second set of images. This German-made strap was acquired from Freda Watch Straps.

One costs $69.95 on the list, but I already had it lying about from using it on the Glycine Eugène Meylan. It looks and feels great on the Claremont, despite being a little too long. The thickness is 22 mm overall and tapers to 18 mm at the buckle.

With the new strap, the Claremont weighs 78 grams, which is a decent weight for a watch. It features a pleasant appearance, a distinctively curved top, and a crystal. The crystal is made of some kind of polycarbonate, which is bad since it seems rather cheap and a sapphire crystal would, in my view, give this watch a more expensive appearance.

The Claremont does have some shining parts on the face, notably the purposefully polished seconds hand that shows the sweeping movement. It would also be good if the bottom of a sapphire crystal was covered with anti-reflective coating.

The watch is simple to set; remove the crown by grasping it from underneath with your fingernail. The crown guard covers the top of the crown, making it difficult or impossible to remove the crown normally. The date wheel may be independently adjusted, and the watch hacking make setting the time simple.

There is a little issue with this watch: the second hand has approximately half a minute left and the crown has about a third of a turn left. When setting the time, it resembles one of those cheap Alpha watches as a result. Setting this Claremont to the precise minute is really difficult since the second hand jumps a little as you push in the crown. The second hand's play is particularly apparent as it revolves around the face because sometimes it lags behind the minute mark when the seconds hand approaches 12.

The most disappointing feature of this watch is its lack of precision, particularly considering that it is dubbed the "Precisionist." Prospective buyers are encouraged to check for play in the minutes hand before acquiring a Precisionist. I'm thinking maybe this is a manufacturing problem that will be fixed with tighter tolerances.

Additionally, the date and the time may be adjusted independently. To do this, gently bring the crown out to its initial position, then rotate it to set the date. Until the crown is withdrawn to the second position, the seconds hand does not stop. Therefore, the ability to alter the date without changing the time setting is a beneficial feature.

However, I must say that the excitement has worn off after a time. I am still loving my Bulova Precisionist so far, and it's interesting to gaze at the face with the sweep seconds hand. It really isn't that big of a deal, and I'm happy I didn't spend thousands of dollars on a Seiko Spring Drive after I got accustomed to seeing it and got beyond the first enjoyment.

I've just had my Precisionist for a week or two, but so far, the accuracy seems to be really good. As far as I can see, it hasn't changed at all from the first setup.

I've worn the watch all day, left it wound up at night, and do so in a range of temps when walking or working out. It will probably take many months to evaluate the movement's reliability and correctness in its entirety.

Running a little bit faster is advantageous since all you need to do to reset your watch is to take out the crown, halt the movement, wait for "atomic" time to catch up (I set all of my watches with a Casio Waveceptor), and then push the crown back in. 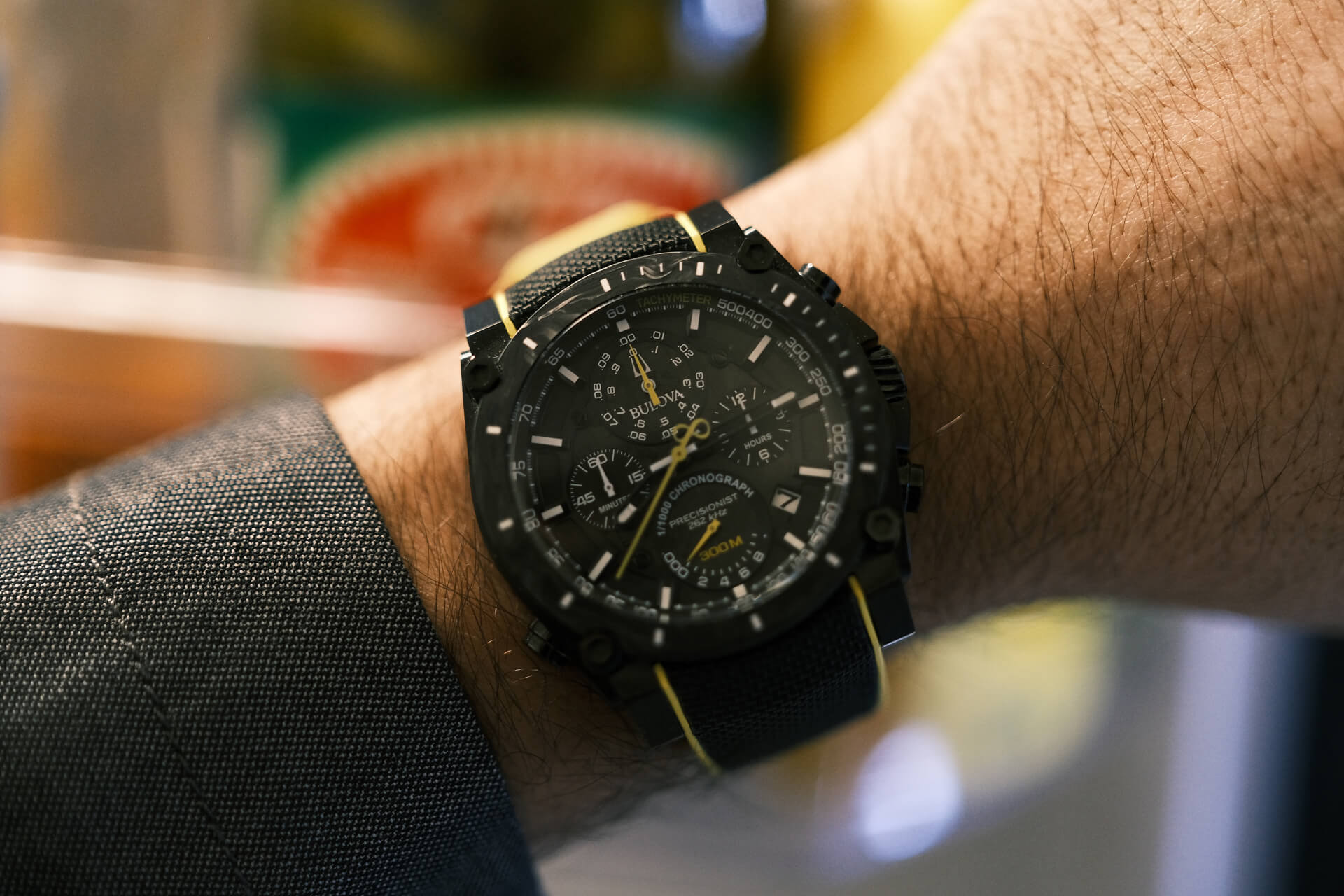 Ability to Read and Face

Even after a full dosage of strong lighting, the hour and second hands have a very small lume, although it is hardly discernible. Since there is no lume on the numerals, the Claremont effectively has no lume.

However, the watch is quite easy to see, mostly because of the contrast between the bright metal or chrome numerals on the face and the deeper brown backdrop. In addition to being more distinctive than the normal white or black faced watches, I picked the brown hue since it seems a little more "earthy" to me. It complements the brown Imperator strap well, and I'm happy with my decision.

Precisionist Bulova Claremont has a list price of only $299.00 and I bought this one for $224.25. Bulova Precisionist watches are just becoming available and can be purchased through Amazon.

Huge congrats to Bulova (Citizen) for commercializing this really rare movement and making a HEQ and sweep seconds hand watch affordable for the common folk like myself. I'm really loving owning The Claremont, which is well worth the asking price. This watch is a keeper!

The "bulova precisionist chronograph" is a watch that has been made from the finest materials. This luxury timepiece features a Swiss-made quartz movement, with a silver dial and black leather strap.