How Do Solar Wrist Watches Work?

A lot of people ask how do solar wrist watches work? Solar Watches are powered by exposure to light which is then converted into electrical energy that is stored in a rechargeable battery. 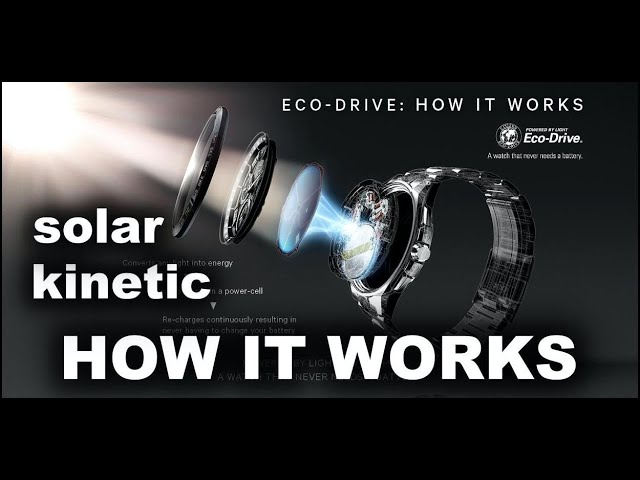 Solar watches are powered by light. They have a small solar panel built into the watch face that converts sunlight into electrical energy, which is then stored in a rechargeable battery. The battery powers the watch movement (the mechanism that keeps time) and any other functions, such as an LED light or alarm.

Solar watches can be either analog or digital. Analog solar watches have traditional watch hands and usually use a quartz movement, which is powered by an electrical charge. Digital solar watches show the time on a digital display screen and are usually powered by a tiny computer chip called a microprocessor.

Solar watches are designed to be long-lasting and low-maintenance. The batteries in most solar watches will last for several years before needing to be replaced, and the watch movement does not need to be oiled or serviced like a traditional mechanical watch.

Solar wrist watches are powered by the sun. They have a small solar panel on the face of the watch that converts sunlight into electrical energy. This electrical energy is stored in a rechargeable battery inside the watch. When the watch is not exposed to sunlight, the battery will slowly discharge and will need to be recharged by exposure to sunlight.

Solar energy is one of the most popular forms of renewable energy, and it’s easy to see why. Solar panels are relatively low maintenance, they last for a long time, and they’re environmentally friendly. But how do solar panels work?

Solar panels are made up of many small solar cells. These cells are made of silicon, a material that is found in sand. When sunlight hits the solar cells, it causes an electrical reaction. This reaction produces direct current (DC) electricity.

Solar cells are the primary component of solar-powered watches. They are made of a silicon wafer, which is sliced into thin wafers and then combined with other materials to create an electric field. When sunlight weakens the electric field, electrons are knocked loose, which flow through an external circuit to power the watch.

Solar batteries are devices that store energy derived from the sun in the form of heat or light. This stored energy can be used to power electrical devices or to provide heat for homes and businesses. Solar batteries come in many different sizes and shapes, but all work by converting sunlight into electrical energy that can be stored for later use.

Solar batteries are made up of two main components: a solar panel and a battery pack. The solar panel is responsible for collecting sunlight and converting it into electrical energy. The battery pack store this electrical energy so it can be used at a later time. Solar batteries are usually mounted on the roof of a home or business, although they can also be placed on the ground or on other structures.

Solar watches use the power of the sun to run. They have a tiny solar panel on the face of the watch that converts sunlight into electrical energy, which is then stored in a rechargeable battery. This battery powers the watch and can last for years with proper care.

Solar watches are powered by light, specifically sunlight or artificial light. The back of the watch typically has a transparent or semi-transparent solar panel that’s covertly integrated into the design. That’s why you don’t often see a big, bulging solar panel on the face of modern solar watches.

As light shines on the solar cell, it generates electricity. The electricity is then stored in a tiny rechargeable battery inside the watch. Some of the newer models even have ultra-capacitors that can hold a charge for much longer than traditional batteries.

Solar watches can be powered by any type of light, but sunlight is best because it’s more intense than indoor artificial light. However, you don’t have to leave your solar watch in direct sunlight to keep it fully charged — indirect sunlight will work just fine.

Solar cells are found on the face of the watch and are usually made from silicon. This material is able to create an electric current when it is exposed to light. The amount of current that is produced will depend on the strength of the light that hits the solar cell. The current that is created is stored in a battery inside the watch. When the watch is not being exposed to light, the battery will slowly discharge. This is why it is important to keep solar watches in a well-lit area when not in use.

Linear controllers work by passing current from the solar cell to the battery in a constant stream. They waste some power in the form of heat, but this is typically not a problem because watches do not require very much power to run. The main advantage of linear controllers is that they are simple and inexpensive to make.

Solar batteries on watches work by gathering light energy from the sun and converting it into electrical energy. This electrical energy then powers the watch movement, which keeps time. Solar watches are an eco-friendly alternative to traditional battery-powered watches because they do not require batteries that need to be replaced every few months. Solar watches are also more durable than battery-powered watches because they do not have delicate battery compartments that can be damaged if the watch is dropped or exposed to water.

So, how do solar watches work? Solar watches rely on a tiny solar panel to convert sunlight into electrical energy. This energy is then used to recharge the watch’s battery. The battery powers the watch’s movement and other features. Solar watches are an eco-friendly and convenient alternative to traditional battery-powered watches.