Is G-Shock the Toughest Watch? | An In-Depth Review of the G-Shock’s Strength

Corporate branding and marketing can sometimes force half-truths on us for years. One of such branding is with the G-Shock line of wristwatches from Casio and how they are the first thing that comes to mind when we mention tough watches. From that, is G-shock the toughest watch you can lay your hands on?

In this piece, we explore this topic and some of the other questions you might have around G-shock watches and their toughness.

TL; DR – G-Shock holds the Guinness World Record for the toughest watch in the world. It also exemplifies this in everyday use as evident in various user reviews – and becoming the unofficial watch type for most Navy SEALs.

The G-Shock line has been here for over thirty (30) years now. If Casio was not doing something right with the line, it would not still be around today with the kind of publicity that it is getting.

Over time, Casio has launched a series of G-Shock products and series.

These series enable the company to attend to various needs and preferences of their vast user base with the same promise of quality, durability, and toughness.

Some of the G-Shock series range include:

Unlike other watch brands and lines, G-Shocks do not rely on aesthetics or delicate manufacturing to give it the edge. Casio focuses on the unique selling point that birthed the idea for the watch to keep making it special.

Under the toughness category, Casio ensures that products in the G-shock line share the following characteristics:

Casio promises that the G-Shock watches can take a beating no matter how it happens.

The shock resistance of the models is ensured in the premium protective case that is wrapped all around the watch face. This approach makes for a hollow watch face such that it is never in direct contact with surfaces that the watch is in contact with.

Thus, shocks will be distributed around the padding on the body of the watch before it gets to any of the inner components or watch face itself.

Many G-Shock watches have been cleared for space travel by NASA. This is no surprise, considering how well Casio put in the work to make sure these watches are G-force resistant.

Most flight instruments have a rating of 15G gravity force resistance. This allows them to function well even when they are under such immense pull and pressure from gravitational forces.

Casio knew they can do better – and they did. Those G-Shocks you see can withstand more than 15Gs!

Most people will only have their watches fall from their hands once in a while. Casio takes that to lengths by testing what happens when the watch is dropped multiple times – or pummelled repeatedly.

In the piston test, a G-shock was repeatedly hammered by a piston from the face-down.

Note that this test does not only affect the watch face but the bands too. After all, the bands will have to compress and expand again after each pummelling. If they were of low quality, they would start showing signs of wear around the bending areas.

It is not surprising that the G-shock came out of that experience unscathed. You can watch the entire test video below for yourself (starts at the 3:40 mark).

The Casio G-Shock going through the test of fire!

When working with high-impact equipment (such as drilling tools), engaging in high-speed driving, or other intense situations, vibrations will happen.

G-shocks don’t want you to have to take off your watch so that they do not get damaged from vibration. Thus, Casio incorporates one of the best vibration-mitigation technologies in the market to keep your watch insulated from related damage.

What is a tough watch that cannot hold its own under extreme temperature conditions? Not the G-Shock.

These watches have been tried and tested under the most severe hot and cold atmospheric conditions and they came back working like it was nothing. To Casio G-Shocks, extreme temperature days are just another day at the office.

One of the initial requirements on the table when making the first G-shock was to have it as a water-resistant model. Fortunately, that has stayed on as one of the salient features to expect from any base model G-shock watch today.

When picking up your G-shock, though, check the water resistance rating on it. Even though they all come with this badge, the depth rating can vary across models.

The G-Shock probably carries more resistance options than the manufacturer even lets on.

Besides the above, the watch still features a magnetic resistance option as well as electrical resistances too.

If it can negatively impact the normal working parameters of the watch, best believe that Casio has a countermeasure under the hood waiting to take care of the situation for you.

Don’t get us wrong. Casio makes great watches and the G-shock is probably one of the best things they will ever produce in the watch niche. However, they don’t have what it takes to support great smartwatches yet.

We have seen some Casio smartwatches and they get the job done right – when you don’t need to connect them with a phone.

Brands like Apple and Samsung are winning the smartwatch race not because they have the best designs, but they have the environment (operating system) to support it also. Thus, they can offer you a lot of apps (from the dedicated play store), extra functionality, and better connectivity with target devices.

These companies have also been in the game for a long time now. You cannot just throw the research and development that went into creating the amazing sensors (activity tracker, heart rate, etc) on those watches into the bin.

Where G-shock smartwatches will count dancing, doing the dishes and other hand movements as ‘steps,’ the picks from Apple, Samsung, and Fossil, for example, would not.

Of course, if you were looking for an opportunity to add yet another G-shock to your list, you could go for them.

The best thing about G-shock smartwatches is that they offer a better value for money than most other smartwatches out there at the price range they sell at. Add on their toughness – and you get the combined functionality of a smartwatch and rugged timepiece all in one.

How long do G-Shocks last?

G-Shocks can last forever with the right maintenance – of which they don’t need much of that.

The only problem you might ever encounter with your G-Shock watch is changing of battery. When you opt for a solar-powered G-shock, that becomes one less problem to worry about.

Used right, you get to sport your G-Shock watch till you get tired of them.

What are the best G-Shocks to Buy?

Even with our wealth experience with watches, we have not been able to go through all of the G-Shock watches out there.

Fortunately, we have used and tried some that were just absolute beasts and lovely to own. We know you will love them too.

Casio stuck to its true nature of rugged watches on this one, no doubt, but they knew that they could bring some beauty into the mix also.

The first impressions of this watch are great.

The watch is fitted with a Bluetooth connectivity option for you to pair your phones and other supported devices.

Under the hood is a heart rate sensor to keep track of your vitals while you go about your daily activities. It also packs other activity-based sensors to track your steps, understand your exercise times, and more.

Finally, we love that this watch is solar-powered.

It is bound to even last longer on a full charge than most other smartwatches on the market today. With a 200m water resistance rating in tow, you cannot go wrong with this watch if you want it. 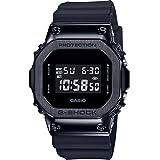 This happens to be one of the best-selling Casio watches ever – and that is for a reason.

The watch is as simplistic as they come and it remains one of the toughest from the brand too. This model has a lot of different variants, so you should look around for which one suits your style and preference better.

Most users worry about the legibility of the watch since the face looks small. However, it handles that just right with a decent screen real estate. The screen is even split to provide multiple pieces of information at a glance – from time to day and date.

Beware of fakes when buying this watch, though.

For context, we got the fake one first before finally getting a trusted vendor for the original pick. 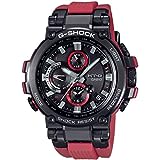 If you are a fan of limited-edition timepieces, this is a fine one for you in the G-Shock line.

Casio paid a lot of attention to detail on this watch, blending all of the black/ gunmetal finish to red and copper details.

On the watch face are a series of tiny yet useful complications to make the watch better functional. Complete with a tough carbon fiber strap, this limited-edition watch is worth every penny that you spend on it.

This is another one of the connected (not smart; connected) watches from the stables of Casio.

The watch face is as complicated as it comes, making it look like one of the best tactical gears that you can ever spend your money on.

At a glance, you get all of the time, day of the week, and date. There are other complications on there that you can use to start a stopwatch or keep time in another country.

The Bluetooth connectivity allows you to link your watch to a smartphone. With solar power support to match, you never have to worry about charging this watch as long as you are using it daily.

Speaking of batteries, Casio promises a 5-month operational use period on a single charge, even if the watch was not exposed to sunlight anymore. That is on normal use, though, not smartwatch usage. Even at that, the true range will come in at about 3-4 months. 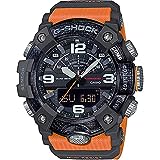 A list of the best Casio G-shocks is not complete without a mention of the Mudmaster.

Depending on your style and person, Casio has delivered the Mudmaster in different finishes.

The one we picked here, which we also happen to like the most, features black and orange details.

Note that the Mudmaster is not designed to be a small watch so it will look large on your wrists. If you would not mind that, you will find the watch face appealing also.

Here, we have a digital and analog display worked into one. Under the hood is a quad sensor including an altimeter/ barometer, compass, thermometer, and accelerometer.

Lest we forget, this watch will also connect to your smartphones via Bluetooth but with limited functionality. On connection, you get extra insights into data like your step counts, route information altitude data, and much more.

How do you love your G-Shocks now?

So, is G-shock the toughest watch? We believe we have answered that question from the very top.

According to the Guinness World Records – and the testimonies of thousands of users from all around the world – the answer to that question is a resounding YES.

We have also told you why they are the toughest but you might not know that they are the first and only company to hold this Guinness World Record.

Thus, when next you are shopping for a watch that holds its own well against abuse, don’t forget to look around for the original G-Shock units.