The Seiko Kinetic SKA553 might not be the best looking watch going, but it makes up for its unassuming looks with some great features. With a sleek design and automatic movement, this is one watch you should definitely consider before making your next purchase.

The "seiko kinetic accuracy" is a watch that comes with a Kinetic movement. The Seiko Kinetic SKA553 has an automatic movement, which means it does not need to be wound. This makes the watch very accurate and durable. 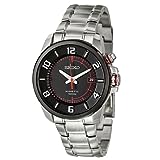 Seiko was established in 1881, and the first watch it made was in 1924. It is the parent company of several sub-brands, the most well-known of which are Grand Seiko, Pulsar, and Orient. It is one of the biggest watch makers in the world.

We believe Seiko to be a respectable company, and we often give its timepieces good marks.

Our reviews are based on our first-hand experience with the watch. All photos and media are created by us (unless otherwise credited). Learn more about Our Watch Reviews Process and also click here to see real customer reviews, specs and prices on Amazon.

With the precision and dependability of a quartz movement and some of the greatest features of an automatic movement, this watch offers the best of both worlds. The SKA553's kinetic movement maintains a six-month power reserve once charged. I completely endorse this watch if you want to wear it every day; however, if you plan to add it to a bigger collection, you may want to think again about getting a kinetic movement.

Technical Information about the SKA553 by Seiko Kinetic

How to use the watch

The SKA553 by Seiko Kinetic functions similarly to other timepieces with a date display and is mostly controlled by the crown. The battery reserve indication is turned on by pressing the button above the crown. For additional details, read more about the movement.

The SKA553 is a stylish, though not particularly young, watch. Due to a recessed inner dial on which the hands, date display, and power reserve indications reside, the watch's black face is made to look more assertive by its multi-layered appearance. The watch seems considerably thicker than it really is due to the two-tier look. 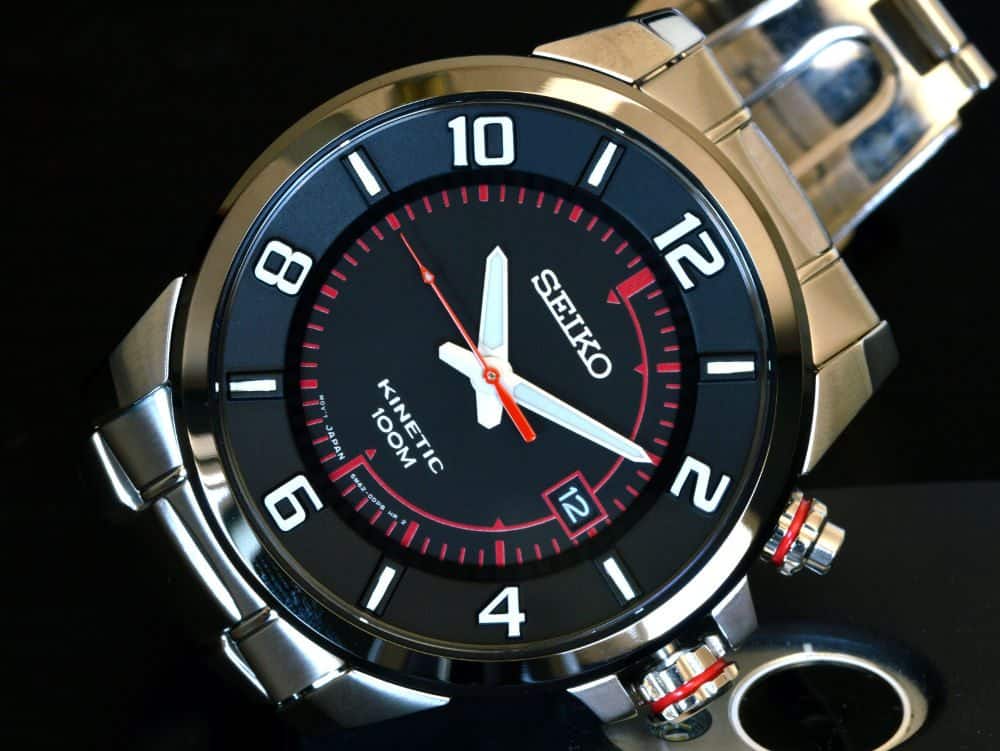 The hour markers are the only objects allowed on the dial's top ring. Confoundingly, only the clocks at 1, 3, 5, 7, 9, and 11 have lume. Thus, only they and the hour/minute hands are visible at night.

There is no ornamentation in the movement. Although it seems strangely similar to an automatic, the movement's clicking sound quickly identifies it as anything but a mechanical when you move the watch. Even yet, it's lovely to see an electric movement honoring some of the amazing qualities of a mechanical movement.

The SKA553 isn't very subtle with its stainless steel band, black display, and large hour markers. The SKA553 will go with most outfits because to its roomy fit and unassuming style, which most guys can wear easily.

Build Quality of the SKA553 by Seiko Kinetic

Seiko is renowned for producing high-quality timepieces with above-average standards of fit and finish. Tight tolerances are seen throughout the SKA553's construction, making it no exception to such norms. When I looked at it with my 90mm macro lens, I didn't see many flaws.

Seiko's exclusive mineral crystal material is called Hardlex. Seiko claims that it has better scratch resistance than a typical mineral crystal. If this is true, it hasn't been possible for me to test it thoroughly, but I have a lot of anecdotal experience with Hardlex and have no complaints from any of the three watches in my collection that have a Hardlex crystal. 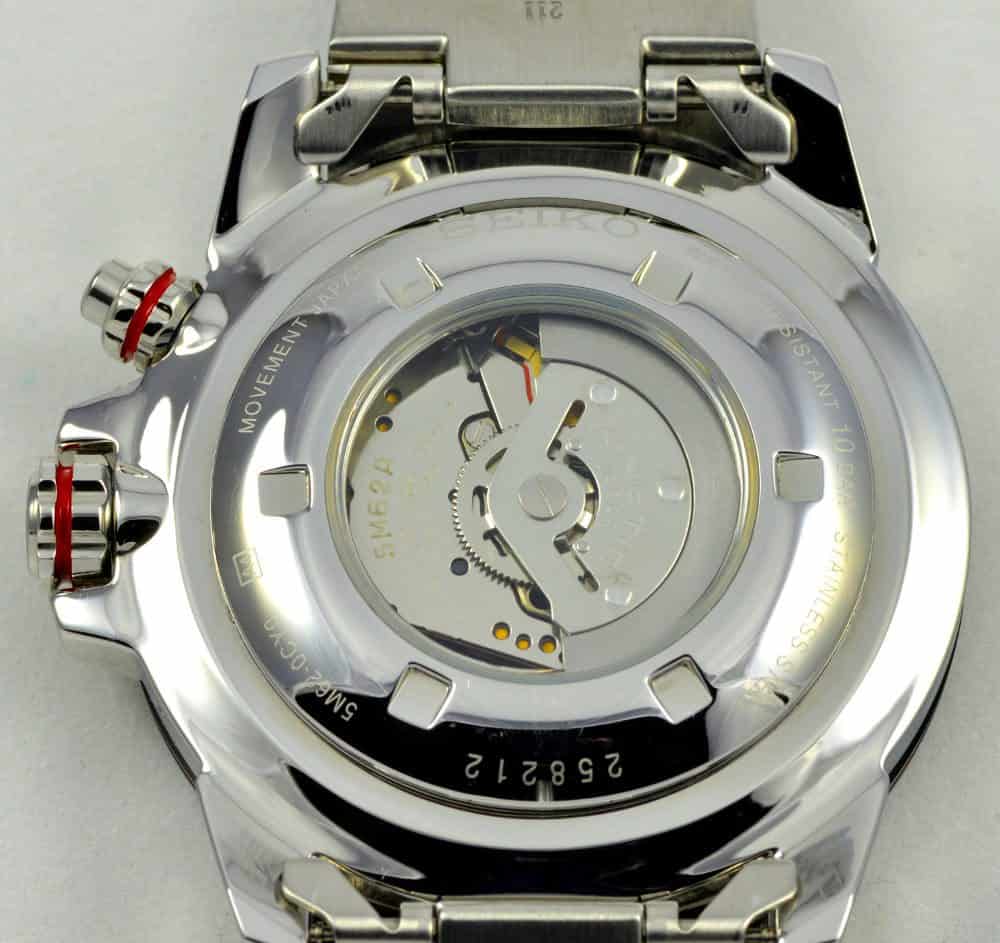 The polished steel bottom half is kept relatively basic, while the black top half is ringed with a thin red ring, giving the stainless steel case the appearance of being two pieces. Despite my rigorous examination, neither exhibited any signs of wear (heh, read more).

While not the most comfortable bracelet I've ever worn, the stainless steel bracelet is also not the least comfy. I believe it will work just fine for the majority of folks. The tolerances between the links are so close together that no arm hairs managed to be pinched, and the general quality of the construction is undeniably commensurate with the watch's cost.

The clasp, which is an incorporated deployment clasp, is high-quality as well. Once closed, it has a solid, snug fit.

Information Regarding the SKA553 by Seiko Kinetic

The 5M62 kinetic movement has an automatic movement-like appearance to the untrained eye. It employs a pendulum to swing an impeller at up to 100,000 revolutions per minute, which charges a rechargeable lithium battery. The battery, referred to by Seiko as a "power cell," is what powers the movement.

I don't mean it negatively, but it feels extremely different on your wrist than an auto does. It's just unique. The pendulum spins with noticeably greater resistance than other automobiles, and the action itself is noisier.

The movement features a feature that alerts you when its battery reserves are low; when it is less than 24 hours, the seconds hand starts to tick at intervals of two seconds. The movement will gradually return to the typical one-second interval once you recharge it by moving your wrist.

Indicators for the power reserve are also present, although not in the conventional sense. When the second hand is at the 12 o'clock position, you click the button above the crown to activate the power reserve display instead of a complication that is displayed on the dial. The second hand will advance to one of the hour markers within the red half-circle when the button is pressed:

My Experiment with Charging the Power Cell of the 5M62

According to Seiko, it takes around 450 wrist swings (essentially, hammering) to build up a two-day charge. I then started watching Netflix while swinging. also swinging Also swinging...

After an hour of continuous swinging, the movement was still occurring in two-second intervals, so I thought I may try something a little more natural by jogging on the treadmill for three kilometers. My reasoning was that because the instructions states that a 720-meter walk should fully charge the watch for two days (and cause it to stop ticking every two seconds), a 3,000-meter jog would undoubtedly fully charge the watch. I reasoned that I would probably acquire enough charge given my previous who knows how many wrist swings.

Funny enough, I was mistaken. It continued to tick every two seconds.

I headed to the treadmill for a second jog with determination. This time, I deliberately moved my arms while walking for a continuous 45 minutes. Since the cause was worthwhile, it didn't matter if I seemed to be attempting to power walk.

I examined the Seiko, which amazingly had avoided being damaged or dinged despite the jogs, after 45 minutes. It was disappointing to discover that it was still ticking every two seconds.

I began rapidly swinging the watch back and forth as I continued to be determined. Finally, after many minutes of this, it began to tick every second. I felt better knowing that the watch wouldn't die for at least 24 hours, and a rush of relaxation swept over me. The power cell is harsh, but my comfort was fleeting since the seconds hand quickly double-ticked once again after returning to its usual frequency.

I shook my wrist furiously to charge the power cell, more determined than ever. The battery eventually stopped shaking after over 20 minutes of nonstop use, and the power meter showed me that I had accumulated at least a week's worth of juice.

The SKA553 by Seiko Kinetic faces fierce competition from names like Hamilton, Tissot, and other budget-friendly Swiss watch companies, with an MSRP of $375. You can probably find entry-level automatics and mid-range quartz movements in the $400 price range. In other words, $400 gets you a lot of options.

For less than $200, you may acquire a kinetic movement that works similarly to an automatic by harnessing the motion of your arm. Additionally, you get a better Hardlex crystal and a well-made product.

I wouldn't hesitate to suggest this watch as a decent buy if I could get it for less than $200.

The "seiko kinetic divers 200m price" is a watch that costs $200. The review will discuss the features, pros and cons of this model.