The first watch with a memory that can only be read by the wearer, and not reset or altered. The company claims it is patented, but this hasn't been disclosed to the public.

The "timex command shock replacement strap" is a watch that was released in the year 2000. The watch has a digital display and uses a unique design that includes a metal band with an adjustable clasp. 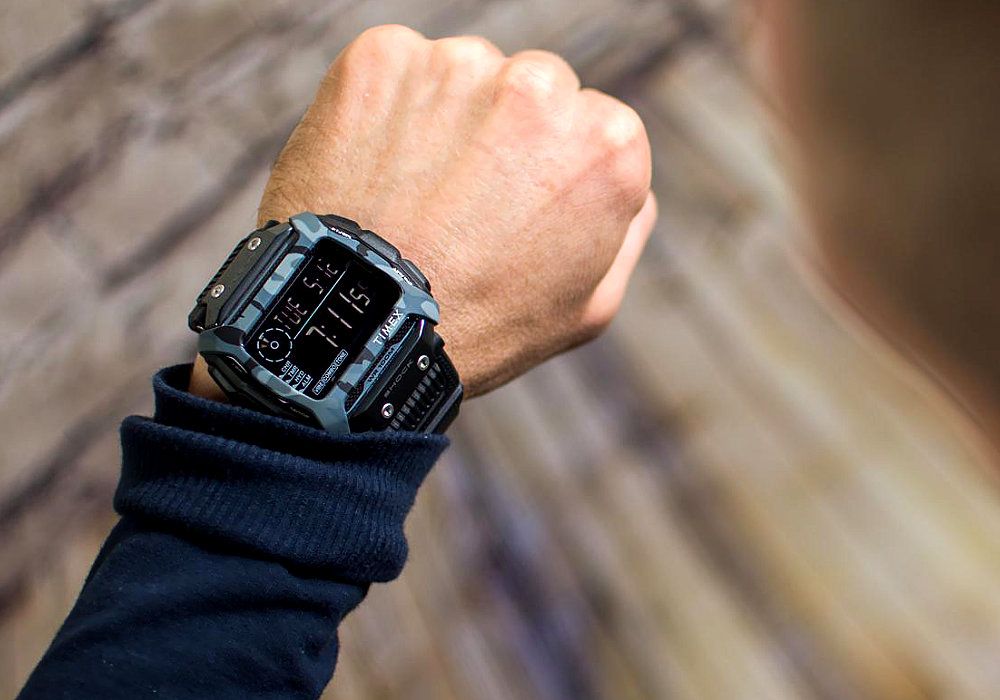 This review of the X Command Time, a 54mm wrist-dominating plastic and camouflage digital watch from the American king of digital watches, is being written in the context of Timex being one of my favorite watch brands.

Long defending its dominant position as the market leader in the "tough watch" area, Casio is now squarely in Timex's sights. The Command presents itself as a hardy watch that can keep up with your way of life (whatever that may be). In essence, it's Timex's response to the G-Shock, with both brands competing for your hard-earned money for watches.

Unfortunately for Timex, apart from a vibrating alert, the Command falls short of its G-Shock competitors and, in certain cases, falls short of the G-ruggedness Shock's or usability. The Command is huge, bold, and reasonably priced, but it's not something I'd recommend. It can be found for just under $100.

The Command was given to us by Timex for free in exchange for this review. 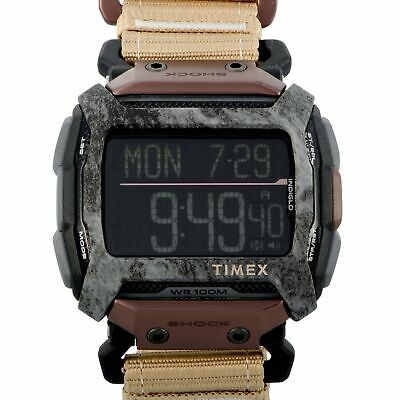 A Watch for Someone With 20-Inch Biceps

I have wimpy wrist syndrome, a chronic illness that has left me with small wrists measuring 6.75 inches (despite having 17-inch biceps), as WYCA readers are aware. This implies that the Command, which measures a massive 54mm, completely rules my wrist. 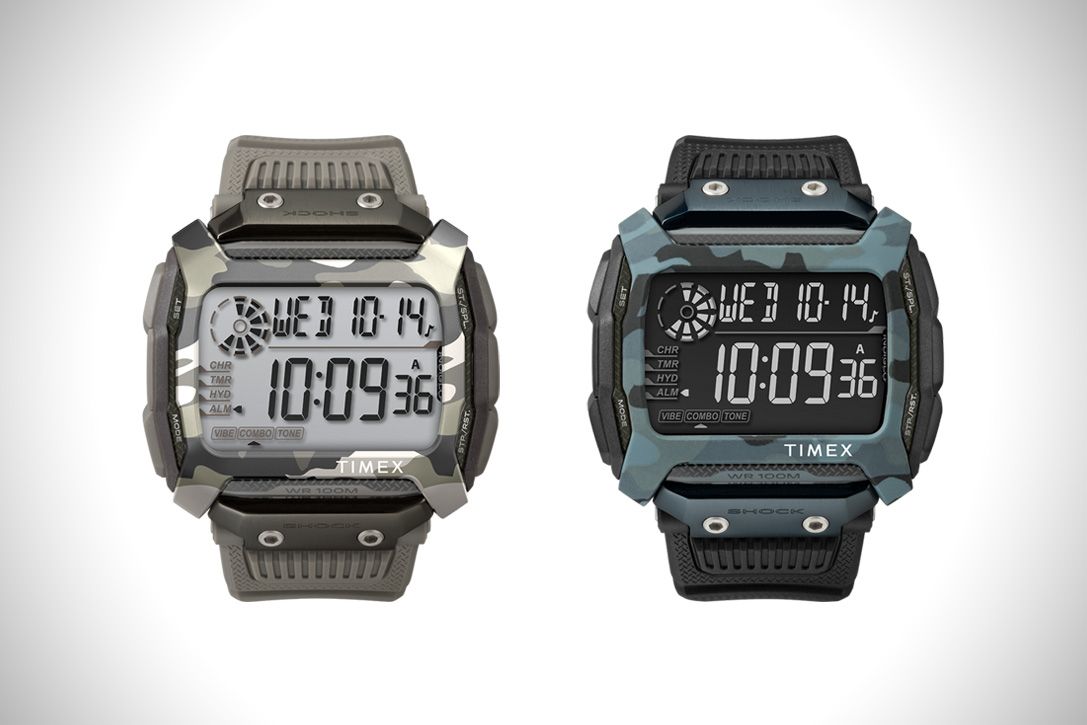 However, a large casing means there is a lot of space available, so the digital display is actually substantial. Unfortunately, visibility is quite poor in most circumstances, despite the fact that it has the real estate equal to a football field on a wristwatch.

This is due to the LED screen's insufficient contrast, which makes it difficult to see the digital dial in any light other than bright sunlight. This is improved by turning on the Indiglo backlight, but as Indiglo cannot be used continuously, you must turn it on whenever you need to see the time outside of direct sunlight.

Despite being enormous, the Command weighs almost nothing. Due to its primarily plastic structure, it is lightweight. This incorporates the flexible, lightweight resin strap (and also thick).

The Command is a little bit over the top in every way. So much so that I had to locate a bodybuilder to display it who had 19.5′′ biceps. The Command includes a built-in hydration alert, which is essentially an alarm you set that reminds you to drink, so that model looked like a good fit. I don't think the alarm is that useful, however; it's just a gimmicky countdown timer.

The vibration alarm is practical and discrete, giving you the option of the standard wristwatch alarm chime or a soft-yet-noticeable bzzz, bzzz, bzzz. The alarm may be set to the combo setting, which will cause the alarm to bzzz for 10 seconds before triggering the chime for 10 seconds, for the more daring among you.

The alarm will sound once per minute for five minutes if unattended. This 5-minute "backup" mechanism won't operate until a current alarm is disabled using the STP pusher in the lower right corner. You may create three other repeating alerts in addition to the hydration alarm using a very helpful user interface.

Many watch vibration alerts are faint and simple to ignore. This is not the case with the Command, which has a vibration feature with almost the same strength as a conventional smartphone.

It seems difficult, yet...

The Command's greatest flaw, in my opinion, is that Timex fashioned it to write an aesthetic check that it can't possibly pay. The Command's very real physical restrictions, such its large acrylic crystal and 100m water resistance, prohibit it from being really rugged.

The crystal, as shown in the picture above, scratches so readily that you just need to glance at the dial in the incorrect way to see a fresh hairline scratch. Before even putting the watch on, I managed to scrape up the dial when cleaning it with a microfiber cloth. Seriously.

You could cover the dial with a piece of dial protection plastic (much as you would for a mobile phone), but you would need to purchase a different product and scale it down to fit the Command. Most people won't take that action.

Although the majority of Casio's G-Shock watches also use cheap crystals, this is more excused given that the dial's surface area isn't comparable to a little moon for wristwatches.

The Command wouldn't be the watch to chose if you wanted to dive beneath the water rather than merely swim or snorkel near the surface of it, even though 100m of water resistance is sufficient in the majority of circumstances. However, you could wear a G-Shock.

The G-Shocks are shock-resistant much like the Command. They don't often provide vibration alarms for less than $100, thus the Command has the advantage in that regard.

The watch itself is fairly amiable and simple to use owing to a clever user interface design, if you get over the acrylic crystal, subpar WR rating, and big perspective. You can switch between the watch's functions by pressing the mode button in the bottom-left, and you may adjust each one individually by pressing the set button in the top-left.

When you hit mode, the function you're switching to is shown on the screen in large letters, making navigation quite simple. The UI is also blazingly quick and lag-free. It shouldn't take you too long to figure it out since it's really simple.

The time is set by:

Indiglo's night-mode is another another useful function. When night mode is engaged, Indiglo will light on for three seconds anytime any button is hit, providing far greater nighttime vision than almost any non-Indiglo watch. Simply hold down the Indiglo button (right center) for three seconds to turn on night mode.

The contrast of the dial is substantially enhanced in night mode, making it simpler to read in a wider range of lighting conditions. The battery will drain more quickly, but how much you actually use and engage with your watch will play a significant role in this.

The triple calendar (day/date, month, and year), several timezones, chronograph, timer, three alarm settings, and "hydration alarm" are just a few of the value-added features that the Command offers. The finest thing, which distinguishes them from most digital timepieces, is that they're all only a simple button push away.

Not a Great, but Also Not a Bad Watch

Regarding the tone of this review, I debated many different options. Although The Command isn't a horrible watch, it also doesn't compare well to some of its cheaper competitors. Its mediocre specification combined with an enormous casing painted in camouflage results in a product that might have been far better than it is. 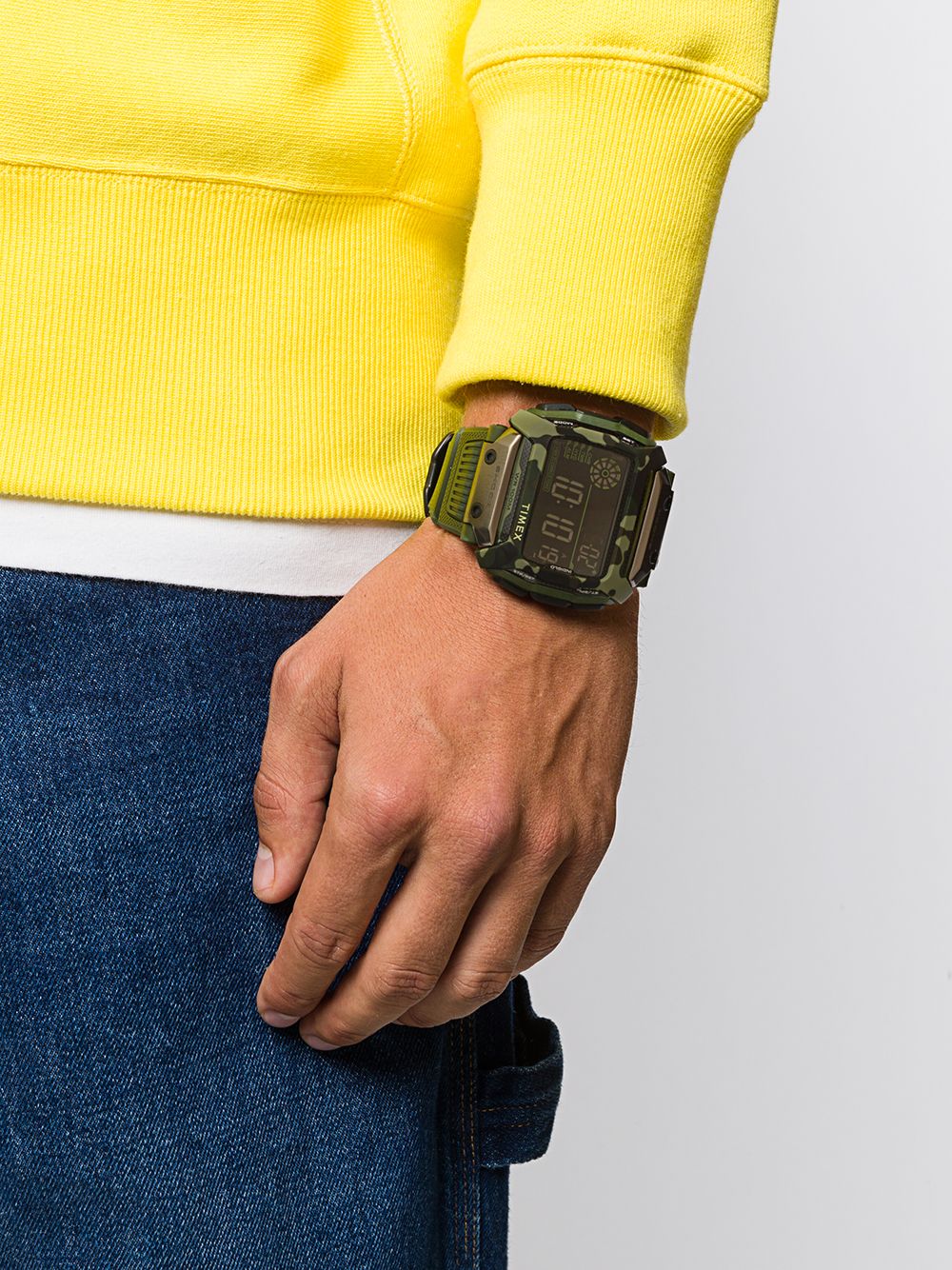 The Command is essentially an upgraded version of the bulky Expedition-series digital watches. With the exception of a "slick" camo paint job, it appears virtually similar and utilizes the same digital module (movement).

This is advantageous since the Expedition is the preferable watch to purchase if you want something similar to the Command. Without the camo paint job, it has a more understated appearance and can be acquired for less money than the $100 you presently need to pay to get a Command.

The "timex command shock digital green camo" is a watch that features a high-resolution, full-color display. The watch also has a built-in GPS and a heart rate monitor. It is water resistant up to 50 meters.