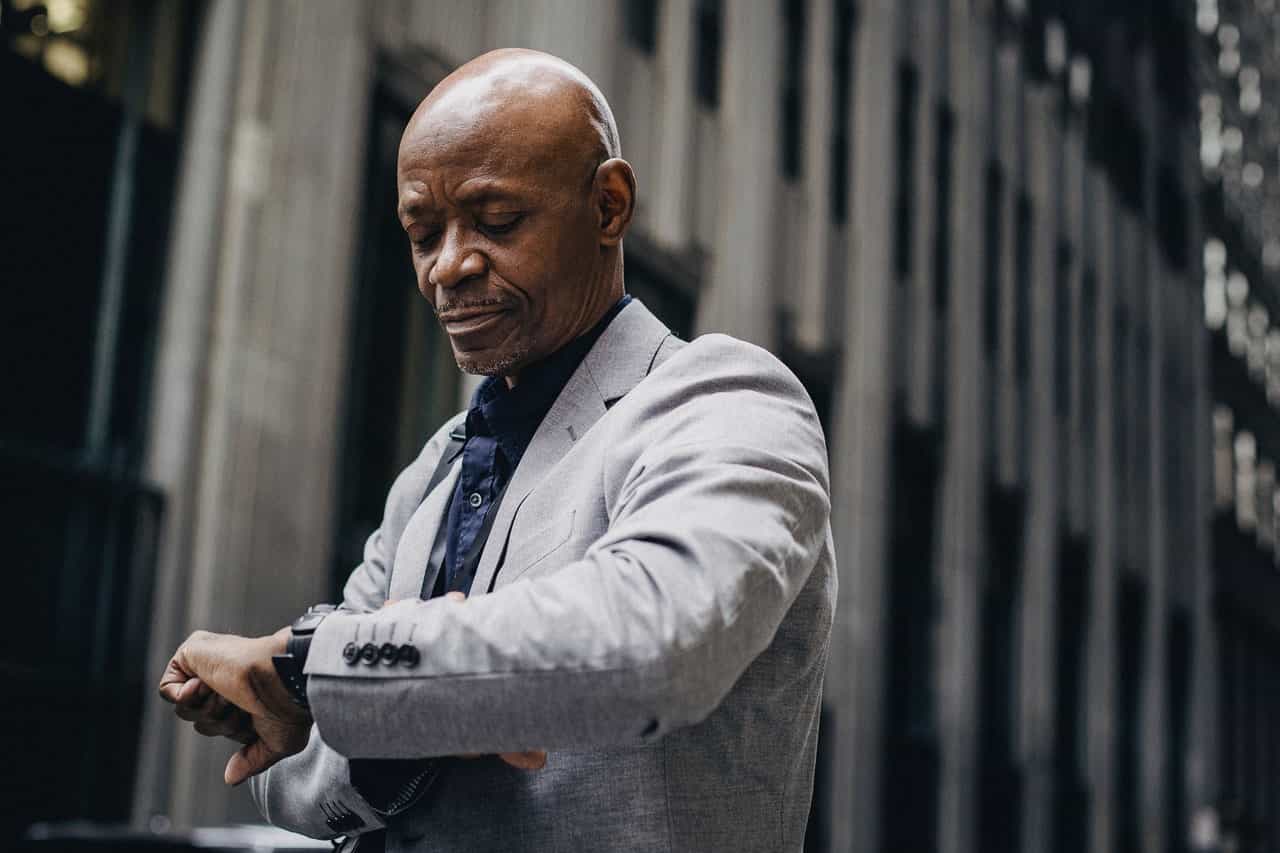 Smartwatches hold a lot of promises for different users in different age brackets. Seniors also stand to gain a lot when they key into the current smartwatch market. That begs the question of what is the best smartwatch for seniors.

We have reviewed several smartwatches here at UberWrists and we can tell you that not all of them are great for seniors. We found that only a small percentage of the smartwatches that we have come across have what it takes to serve seniors right.

Today, we go in-depth into what makes a smartwatch great for an elderly person – and why they should consider certain options also.

TL; DR – The Apple Watch Series is the best for seniors. We recommend anyone from Series 5 and above. A worthy alternative is the recently launched Galaxy Watch 3 from Samsung.

Any smartwatch enthusiast knows that Apple Watches are a great piece of creation from the company.

They came a little late to the party but they have been cementing their position as a pioneer in their own right since then.

As of this writing, we have the Apple Watch Series 6 out already. While we are always recommending that people go for the Series 5 units, seniors will appreciate the new ECG monitoring sensor that ships with this one. That helps them to keep a better eye on another aspect of their health without having to go to the hospital.

Over time, there have been some disparities between experts and users on how effective the measurement of vitals is on the Apple Watch. No matter where that argument leads, there is no denying the fact that the Apple Watch has been responsible for saving multiple lives.

In some cases, the watch has:

There are a lot of such cases, but you get the drift already.

That said, what makes the Apple Watch special for seniors at all?


Why the Apple Watch is Great for Seniors

We considered a lot of features and factors on the Apple Watch, as well as other smartwatches we reviewed, before making the final decision on this unit.

Some of the things that stood out to us include, but were not limited to:

Seniors are not as familiar with changing technology as the younger generation. Thus, it is usually a challenge to introduce them to a new piece of tech.

Thankfully, the Apple watch series is just like the phones – they just work.

Seniors don’t have to worry about a steep learning curve before they get to use their watch better. Everything is made as simple as possible already. All they have to do is get their details on, get synced up to their iOS devices and they are ready to go.

For a premium smartwatch, the Apple Watch scores high on this ease-of-use table.

From the Apple Watch Series 4 models, Apple has started introducing up to 44mm watch sizes. On the rectangular screen, this size allows a lot of room for legibility.

There is no gainsaying that this will be a huge plus to seniors. Most of our elderly have waning eyesight and we are not about to stress them further with a watch that they will have to squint to see.

The larger watch faces also make it easy for seniors to interact with Apple watches. Even if the elderly person is having decreasing motor coordination, they won’t find themselves fumbling the icons and controls on the screen too much.

Siri’s integration into the smartwatch is the best we have seen when compared to other smartwatches on the market.

That allows seniors to get a lot more done without having to even pick up their phones. Talk about controlling connected units, pulling up contacts on their devices, and more, and we have a clear winner here.

The Apple Watch ships with a Noise app that warns you when your environment is too loud.

This new feature is highly laudable in helping to prevent the onset of hearing loss – or degradation of an already present issue.

With immediate alerts popping up on the screen when the noise levels are becoming unusual, seniors can know when to exit an environment before the case gets worse.

We have hinted at this somewhere above, but it deserves another section here.

The Fall detection mode might look like nothing for those who can easily get back up after falling. What about seniors who might need help getting back up, or maybe even be at risk of mortality? Those are the people Apple has at heart.

This would explain why the feature is automatically turned off if you are below the age of 55 – although you can manually override that.

On falling, the watch automatically sends you a notification that you can tap to confirm that you are okay. If you don’t tap this prompt, and the watch doesn’t detect any movement from you, it calls emergency services ASAP.

And yes – that has worked wonders for multiple users as referenced above.

Note: If you have your emergency contact details filled out, the watch will also notify them of the fall. The notification carries the exact location of the watch wearer as of the time of that fall.

One of the earliest features of the Apple watch from 2018 was the detection of atrial fibrillation.

This abnormal heart rhythm is not always dangerous. Left unattended to, though, it could grow into strokes, blood clots, heart failures, and other complications.

Seniors are at a higher risk of facing such complications. It is, thus, a no-brainer that they have a way to keep an eye on their heart rhythms.

The Apple Watch series (running on Watch OS 6 and above) will check on your heart rate at intervals to make sure everything is fine with you. The instant something seems off, the watch gets you on alert.

You can also set the watch to inform you when your heart rate is lower or higher than normal. For ‘normal,’ you would have to first specify what your normal heart rate range is. If the readings should exceed or go below that, the watch lets you know instantly.

Did you know that the Apple Watch helps to keep a handle on your stress levels?

The Breathe App (comes with the watch) contains a variety of breathing and relaxation exercises that helps make you calm in an instant. Anytime an elderly person is feeling overwhelmed or overexcited, they can just tap on their Breathe App, follow the prompts and get to normal vitals range in no time.

There are a lot of activity tracking sensors in the Apple Watch. One that we know seniors will benefit from a lot is the Stand Ring aspect.

The watch measures how much you sit about and move around in the day. If it observes you’ve been sitting down for too long, it encourages you to stand up and move around for a while.

For seniors who are not immobile, this is a great way to ensure they do not fall into a sedentary lifestyle. Such small movements constitute exercise also, helping to keep seniors healthier and fitter.


Does the Apple Watch Call 911 If Your Heart Stops?

There is nothing to suggest this yet from the manufacturer.

The feature might be in the works, but we do not believe that the Apple Watch will call 911 in the case of a wearer’s heart stopping. We will update this section accordingly as soon as we get new information from trusted sources.


Can Apple Watch Be Used as Life Alert?

The Apple Watch has a lot of obvious features that make it suitable as a secondary medical option. However, there are valid arguments against using the watch as a standalone life alert mechanism.

One of the drawbacks of an Apple watch is that you need to own an iOS device to get the best of it. Not just any iOS device either but one of the latest models. The cost of setting that up could be too high for some seniors.

Likewise, we would prefer if Apple would make the provision for the watch to call dedicated medical alert personnel instead of 911.

While calling 911 is great, not all 911 operators and providers have the technology to pinpoint where a call is coming from. Likewise, there is the chance of human error where the call from the watch is disregarded.

On the other hand, medical health subscribers are connected to a standalone 24/7 service focused on them.

If you can find a way around those, though, the watch is a nice wearable that makes life easier for seniors.


The Galaxy Watch 3 – Another Great Smartwatch for Seniors

The biggest win for this watch is that it pairs better with iOS and Android devices than the Apple Watch manages. It also comes with important activity tracking sensors, but they could be inferior to what Apple has slapped on its unit at points.

This new Galaxy Watch 3 ships with an oximeter sensor like you would get on the Apple Watch too. Featuring a more traditional design, the elderly can make the watch their daily driver too. The only drawback would be in having to charge their smartwatches once every day or two.

We have, by far, the best two smartwatches on the market right now here. They are not just great for seniors because of the features they pack – but how those features help them.

With the information now at your disposal, it becomes easier to choose the best smart wearable unit for seniors.